Understanding how the stock market's dividends are changing is key to understanding what investors are expecting in the future of the market. Today, we're going to look at four snapshots in time, which correspond to different points in time of the now 60% rally in stock prices that has taken place since the market bottomed earlier this year. 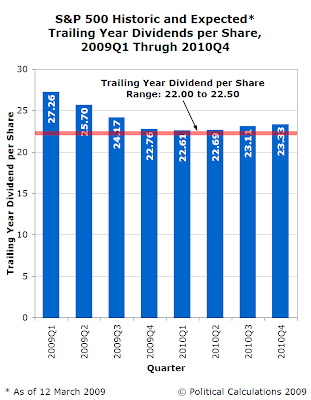 Our first chart dates from just days after the stock market reached its lowest closing point on 9 March 2009 and incorporates both historic dividend data for the stock market and the available dividend futures data of the time. What we find is that at the very beginning of the rally investors were projecting that dividends per share would fall sharply into 2010 before reversing in the first quarter of that year, with dividends expected to be slowly climbing afterward. 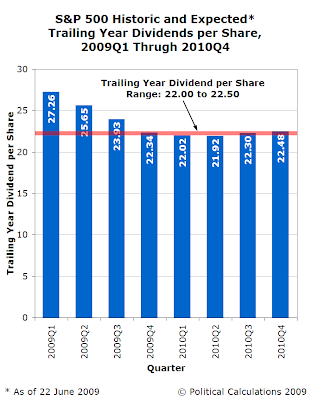 Our next chart shows how future expectations for the stock market's dividends had changed as of 22 June 2009. Here, we find that investors were expecting a very slow recovery in dividends, with all forward looking dividends from the fourth quarter of 2009 through the end of 2010 falling into a very narrow range, which we've indicated with the horizontal red bar on the chart, and which we've used as a fixed reference on all the charts we're presenting today.

What we find interesting here is that stock prices had risen over 32% from their bottom at this point in time, even as the expected level of dividends per share eroded without suggesting stronger growth in the future. What that observation tells us is that much of the market rally through this point in time was based on the expectation by investors that the situation of publicly traded companies was becoming "less bad."

These two observations contradict what many market and economic analysts have indicated they believe lies behind the stock market rally we've observed in 2009: the hypothetical expectation by investors of a "V-shaped" economic recovery. In our view, this hypothesis has become something of a "straw man" argument, one made specifically for the purpose of knocking it down to make the analyst appear more credible. 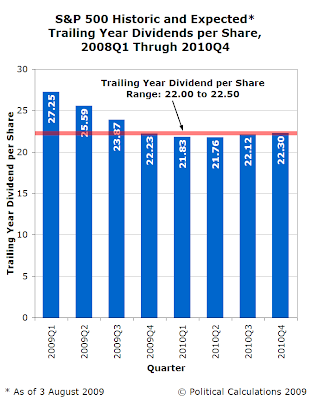 But what about since? Our next snapshot of the situation for stock market dividends is from 3 August 2009. In this chart, we observe that the expected future dividends per share for the stock market declined across the board from where they were in our June 2009 snapshot by nearly equal amounts. Again, this observation is consistent with an investor expectation of a situation for the stock market where a decline in the business situation for publicly traded companies is progressively losing steam and becoming more likely to reverse. At this point in the 2009 rally, stock prices had risen just over 48% off their lowest closing value. 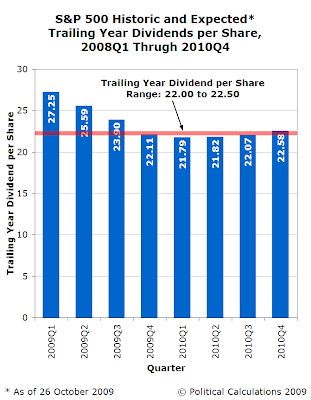 Let's now look at where the future for dividends stands in the stock market today, with the stock market now at levels nearly 60% above the point where the current rally began. Our chart incorporating dividend futures data through 26 October 2009 reveals that the downward momentum for dividends has just about stopped in the near term, with the first quarter of 2010 just five cents per share below where it was projected to be in early August 2009.

But here, we see a significant reversal from the trend we've seen throughout the market rally. Each quarter going forward from that point is both higher than where it was forecast on 3 August 2009, but also progressively higher in two of the three following quarters. What this observation suggests is that investors are now expecting a real recovery for the publicly traded companies of the stock market.

How real is that suggestion of a recovery though? We've dug into the data behind the dividend futures data and found two significant changes that have altered investors' view of the future for the stock market.

First, on 12 October 2009, JP Morgan Chase (NYSE: JPM) announced that they would be very likely to substantially increase their dividends in 2010. This announcement is significant in that the bank had previously slashed their dividend by 87% to just five cents per share as requirement imposed by the government for having received funding from the Troubled Asset Relief Program (TARP) in October 2008.

At the time, the slashing of the company's dividend help contribute to the market crash in October 2008, so the resumption of the company's dividends at higher levels would indeed indicate a recovery, although perhaps an artificial one. By that, we're referring to the role of the government in mandating all TARP recipients cut their dividends to no more than five cents per share, regardless of their financial health. Since JP Morgan Chase was considered to be a healthy company at the time it cut its dividends, so its resumption of paying higher dividends doesn't necessarily indicate that economic conditions are improving substantially.

That brings us to today, where once again dividend futures have leapt in value over the past weekend, as Freeport-McMoRan Copper and Gold (NYSE: FCX) announced that it will resume paying its dividend. The mining and raw material producing company had previously suspended its dividend payments in early December 2008 as the world economic situation was worsening at the time.

Between the two dividend announcements, the Freeport-McMoRan is more significant in that it is not influenced by the U.S. government's intervention into the market, which indicates that the economic situation is indeed improving.

What we have then from our observation of how stock market dividends are changing is a mixed-to-slightly favorable impression that an economic recovery is indeed taking place. What we'd like to see is more publicly-traded companies in industries where the government hasn't co-opted basic business decisions follow suit in boosting their dividends, which would confirm that the apparent recovery has strength.

In the interest of disclosure, Ironman holds no positions in either JP Morgan Chase or Freeport-McMoRan.