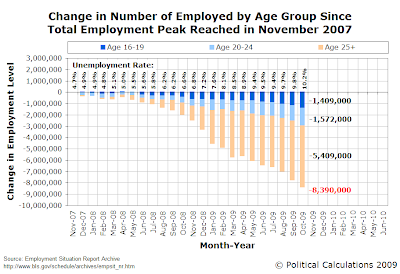 Teen job loss surged in October 2009, as the number of teens no longer counted as being employed in the government's labor force statistics since the current recession began in December 2007 jumped from 1,202,000 (1.2 million) in September 2009 to 1,409,000 (1.4 million). As a percentage of the 8,390,000 jobs that have disappeared from the U.S. economy since the total employment level peaked in November 2007, teens now account for 16.8% of the total job loss. During that period of time, the percentage of working teens within the entire U.S. workforce has fallen from 4.00% to 3.22%. 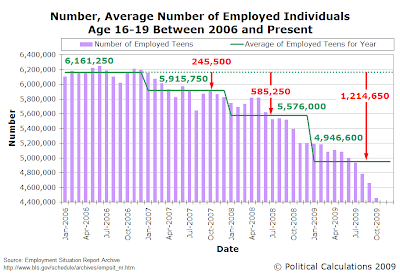 October 2009 also marked another grim milestone for working teens, as the year-to-date average for 2009 of the number of teen jobs lost since teen employment peaked in June 2006 now exceeds that seen during the Bush administration.

The bulk of that job loss since President Obama's inauguration has occurred since April 2009. In the six months since April 2009, spanning the third through ninth months of Barack Obama's presidency, the number of employed teens has actually fallen by 651,000, with 481,000 of that decline occurring since July 2009. 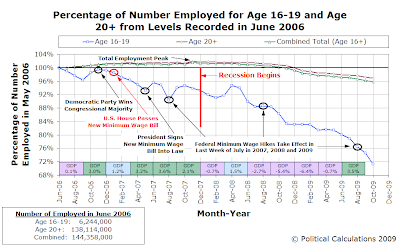 We observe that the rate of teen job loss has accelerated sharply since July 2009, which coincides with the most recent increase in the level of the federal minimum wage.

President Obama's most significant economic achievement to date, the $787 billion American Recovery and Reinvestment Act of 2009 (aka "the Stimulus Package") was passed into law on 17 February 2009. The Obama administration's other signature economic policy, the Cars Allowance Rebate System (aka "Cash for Clunkers"), was signed into law on 24 June 2009 and ran from 1 July 2009 through 24 August 2009.

That's significant because in theory, with no more federal minimum wage increases scheduled to take place following the most recent increase, the number of teen jobs should be stabilizing or rising. Especially if the economy was genuinely improving, as might be expected if the additional government spending enabled by the "Stimulus Package" and "Cash for Clunkers" were going to economically productive activities.

We find that even as GDP apparently grew at an annualized rate of 3.5% (according to the advance release figure for the third quarter of 2009) thanks in large part to the government's Cash for Clunkers program, progressively greater teen job loss occurred throughout the quarter instead.

But perhaps that outcome was unavoidable, given the over 40% increase in the cost of employing the least educated, least skilled and least experienced portion of the U.S. workforce that has taken place in stages over the last two years.