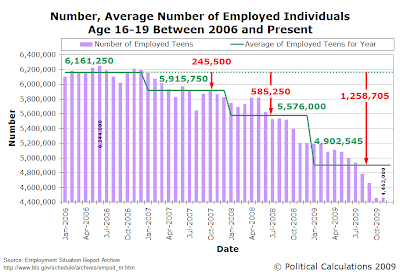 Compared to the previous month's data, the BLS' Labor Force Statistics indicate that 10,000 additional teens were counted as being employed than in the previous month, bringing that portion of the U.S. labor force up to 4,462,000. In October 2009, some 4,452,000 individuals Age 16-19 were counted as working, which marks the lowest point for U.S. teens since their employment levels began declining steadily in January 2007. 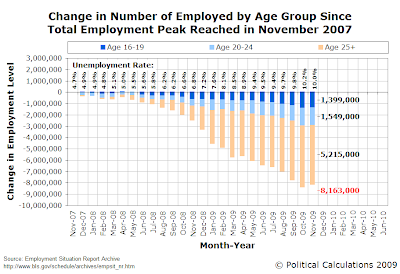 Since December 2007, which the National Bureau of Economic Research declared to be the peak of the previous expansion of the U.S. economy, making it the starting point for recession, the employment level for teens Age 16-19 has fallen by 1,399,000, representing 17.1% of the total decline of 8,163,000 jobs since the latest recession began as of November 2009. That compares with 1,529,000 for young adults of Age 20-24, who account for 19.0% of that decline. Together, individuals Age 16-24 represent 36.1% of all jobs lost since the declared beginning of the recession.

Of course, there's a reason for that!... 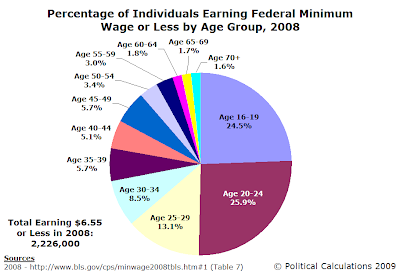 The good news is that at least one economist at the University of Chicago has begun to catch on to why teens and young adults would seem to be so disproportionately affected by disappearing jobs. Oddly, the economist only seems to think that it only became an issue in July 2009. Rather than, say, January 2007, when the people who might hire teens and young adults began reacting to the situation that developed by not creating jobs for these youngest, least educated and least experienced potential members of the U.S. workforce: 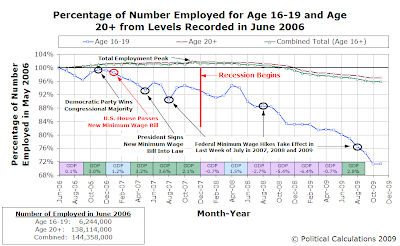 It's an odd thing, this kind of economic myopia!