What does the future foretell for the U.S. economy in 2010? Well, why wonder when we can show you! 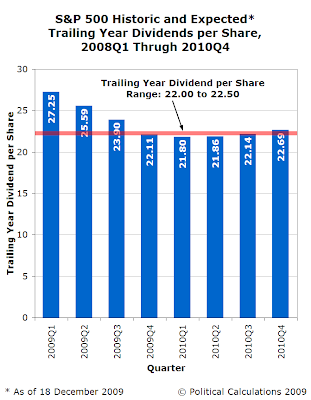 Our first graph shows how well the private sector of the U.S. economy is projected to perform, at least according to the expected trailing year dividends per share for the S&P 500. What we see is that this measure of economic health will likely bottom in the first quarter of 2010 and very slowly improve over the remainder of the year.

Looking instead at how these expectations have changed during the course of this year, the horizontal red bar indicates the range into which the S&P 500's dividends were expected to fall from 2009Q4 through 2010Q4 back on 22 June 2009. What our newer chart confirms is that U.S. economic performance clocked in just below what investors expected would happen in mid-2009, which we see in the vertical bars dropping below the range indicated by the horizontal red bar. We also see that they now anticipate a stronger recovery in 2010 than what they believed to be likely back in June 2009. 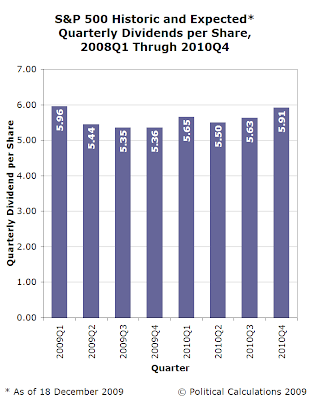 Let's look next at the expected level of dividends per share quarter by quarter through 2010. Here, we see that the bottom for the private sector of the U.S. economy occurred in 2009Q3. As a result, this quarter will be the most likely candidate for being the period of time in which the National Bureau of Economic Research (NBER) will declare the recession beginning in December 2007 to have ended.

We also observe that the quarterly dividend value we're projecting for 2009Q4 isn't much of an improvement over 2009Q3, suggesting lackluster economic improvement. We'll note that we expect the final value for this quarter to be slightly different from the value indicated in the chart, as our method for anticipating a quarter's dividends typically puts us within 3-5 cents of the actual figure reported by S&P. S&P will report the value for the S&P 500's 2009Q4 dividend per share in January 2010.

If you look further forward into the future though, you'll see the bad news looming ahead - the U.S. economy will very likely reverse its momentum briefly in the second quarter of 2010. After this quarter however, investors currently anticipate that slow economic growth will resume through the end of 2010.

Consequently, the second quarter of 2010 is the most likely candidate to qualify as a double-dip for recession in the U.S. But then, this is the same as what investors have been expecting since at least August 2009.

This observation also provides an indication of how the job market in 2010 will play out. Job seekers can expect better luck in finding jobs into 2010Q1, then to drop off into the second quarter as companies freeze hiring plans until they can support new employees, and then to pick up again more strongly in the final two quarters of the year.

From our perspective, the only real question about the economy in 2010 is whether the NBER declare the recession to have ended in 2009Q3, which we think is most likely, or will they extend the end date of the recession to include part or all of 2010Q2?