At the beginning of December 2009, we recognized that investors had effectively reached the edge of the chart in navigating the U.S. stock market. They had first reached the edge in October 2009, as they looked forward from that month to the fourth quarter of 2010 to set the value of stock prices with respect to the level of the S&P 500's dividend futures expected in 2010Q4.

Here is what we observed at the time, as we recognized that investors were entering uncharted waters:

But we have a problem, and that problem is that we strongly suspect we've run over the edge of our chart. Here's exactly what we're looking at on 1 December 2009 as we consider our forecast: 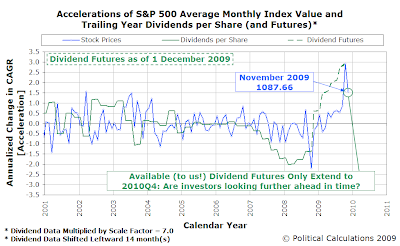 There are two potential explanations for what we observe. The first is that investors have perhaps focused their attention upon the second quarter of 2010 instead of the fourth quarter, as we see that the level of the amplified change in the growth rate of dividends per share would seem to correlate reasonably well with the change in the rate of growth of stock prices we observed for November 2009.

That would make sense if there were some news affecting the expected future level of dividends per share to be paid in that quarter. However, we're unaware of any such news and in its absence, we think that to be unlikely.

The other potential explanation for what we see happening is that investors are looking past where they expect the S&P 500's dividends per share will be in 2010Q4 to the first quarter of 2011 instead, as determined by the dividend futures contract that applies for each quarter. That would make sense since the 2011Q1 contract would correspond to the period of time that includes the end of 2010, as the 2010Q4 futures contract only extends to 17 December 2010. That focus would also agree with much of what we observed during this year, with investors primarily focused from May through October upon the dividend futures contract for 2010Q1.

They've instead set them with respect to where they expect the S&P 500's trailing year dividends per share will be in the first quarter of 2010, just as they have throughout most of 2009! 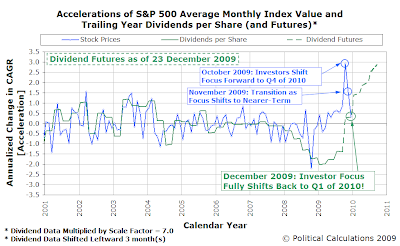 In effect, stock market investors in the U.S. have returned to safer harbors. What we observe now is that the change in the rate of growth of stock prices in November 2009 was simply a transition between the two future points of investor focus.

With this knowledge, we can now revise our forecast for where the average of stock prices will be for the month of December 2009. Amplifying the value of the expected change in the growth rate of the S&P 500's trailing year dividends per share by scale factors of 6.5 to 11.0, which we've previously observed to be typical range for the U.S. stock market since January 2001, we project that the average of the S&P 500's closing daily index value for December 2009 will fall between 1101 and 1115, which is indicated as the converging orange region in the chart below. This marks an upward revision from the top end of our previous forecast range of 1032-1094, which is indicated by the dashed lines. 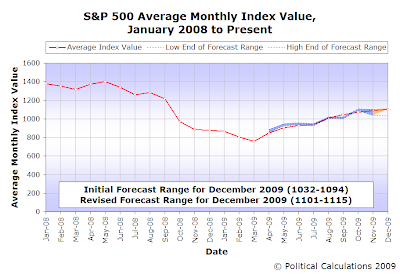 Having recorded an average value of 1105 through 22 December 2009, we find it very likely that stock prices will fall into our revised target range for the month.

Assuming that the average value of the S&P 500 index will end the month with the same average value of 1105 and that investors remain focused on 2010Q1, we would project that stock prices in January 2010 will fall between 1110 and 1123, provided there are no major changes in 2010Q1's expected dividend payouts.

And with that prediction based upon still incomplete data, we'll sign off for the year. Have a Merry Christmas and Happy New Year!