Between the months of November and December of 2009, 589,000 jobs disappeared from the U.S. economy. 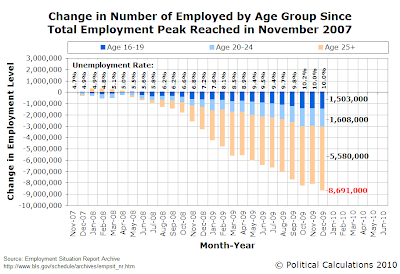 Since total employment levels peaked in the United States in November 2007, over 1.5 million teen jobs have disappeared, while more than 1.6 million jobs for young adults Age 20-24 have vanished as well. When combined, these two youngest age groups account for nearly 36.8% of all job losses since the beginning of the current recession in December 2007.

With the latest employment numbers released in January 2009, the Bureau of Labor Statistics has revised its employment figures going back several years. We're taking the opportunity to update a number of our employment charts showing how teens and young adults have fared in the economy of recent years. 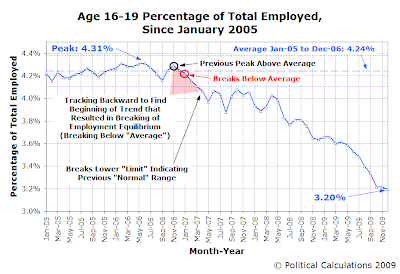 Our first chart shows the percentage of teens with respect to the total number of people counted as being part of the U.S. civilian labor force since January 2005.

Here, we see that the relative percentage of teens in the U.S. workforce has declined steadily from the average value of 4.24% observed between January 2005 and December 2006, with small differences from the values previously reported by the BLS. We see that the percentage representation of teens peaked at a high value of 4.31% of the workforce in June 2006 and last peaked above the average level at 4.29% of the total U.S. workforce in November 2007. 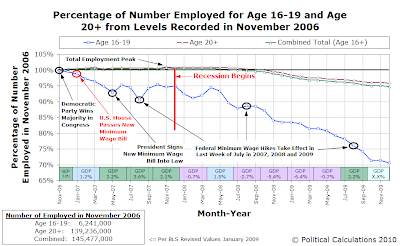 The BLS' revised figures have however changed the timing of when teen employment numbers peaked in 2006. The new figures now indicate that the number of individuals Age 16-19 who were counted as part of the U.S. workforce peaked at 6,241,000 in November 2006, now coinciding with the last peak above the average level of the percentage representation of teens within the U.S. workforce from January 2005 though December 2006.

Moreover, we confirm that changes in teen employment levels in 2007 remain well correlated with the legislative process that led to the passage of higher minimum wages in the United States. We observe that teen employment levels were declining for a year prior to the beginning of recession in the U.S., despite robust economic growth throughout 2007.

As of December 2009, we find that compared to when teen jobs peaked in November 2006, the number of teen jobs has declined by 29.5%, with nearly 3 out of every 10 teen jobs that existed three years ago no longer in existence. 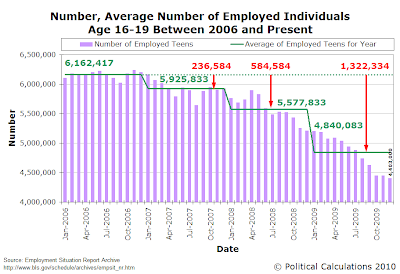 Looking at the monthly number of employed, we see that after reacting to the minimum wage increases of 2007, teen employment levels were largely steady at a lower level until April 2008. the period of April 2008 through October 2008 saw a sharp decline in the number of employed U.S. teenagers, as it coincided with a period of record high oil prices in the U.S.

American consumers reacted to the spike in oil prices by reducing their retail spending to compensate. With such a large portion of teens are employed in the retail sectors of the U.S. economy, it makes sense that their employers would act to remove a large number of teens from their payrolls to compensate for the reduction in consumer demand.

Teen employment then stabilized from October 2008 through February 2009, as the greatest period of distress occurred in the U.S. banking and financial sectors and the U.S. automotive sector, as we might expect since so few teens work in these industries.

At the end of February 2009, the so-called "economic stimulus" bill advanced by President Obama was passed into law by the action of his majority political party in Congress. We see the reaction of employers since has been largely to reduce the number of teens on their payrolls, beginning almost immediately in March 2009. Teen employment rose slightly in April 2009, then began falling at the fastest rates of the entire period of teen job loss through October 2009.

Teen employment levels, while lower than October 2009, may be beginning to stabilize. We'll need several more months of data to confirm if that's the case.

The Obama administration would appear to finally be reacting to the declining employment situation in the United States and the near-complete failure of its vaunted "economic stimulus" package to improve it:

A top White House economic adviser said Sunday "you'll get no argument from" her on the need to improve the miserable jobs picture.

Council of Economic Advisers chief Christina Romer said it's devastating that some workers have been unemployed for two years and that job losses were continuing nearly a year after passage of the so-called stimulus bill.

"The sense that we need to do more is overwhelming," she said.

By "more," Romer is referring to additional "targeted" economic stimulus measures, such as the proposed "Cash for Caulkers" program and extended COBRA health insurance subsidies for the unemployed who elect to continue their employer-provided coverage, who would otherwise have to pay the full cost of the health insurance to do so.

We can't make this stuff up.