We've been doing some economic detective work and we believe we found the exact trigger behind the stock market's sell-off last week. Along the way, we found out just how long it takes for the stock market to react to news it wasn't expecting. 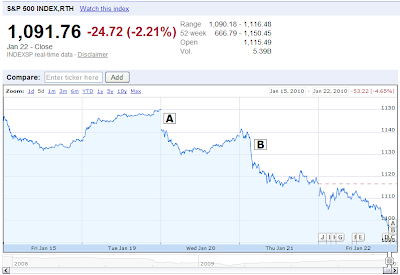 In examining the chart, we find two potential trigger points:

Now let's line up our mostly likely suspects, which we've identified by scanning the market commentary of the past week, starting with our own favorite usual suspect:

Let's now see where our suspects were on the two days in question:

Change in Market Fundamentals: The table below shows what the S&P 500's dividend futures expected for each of the five days in our data sample.

In the table above, we see a contradiction on 19 January 2010. Here, the day's projected dividend futures suggest that stock prices would push lower, but instead, the S&P 500 rose on the day. Applying our analytical methods, this outcome suggests the influence of noise, where a non-dividend related news event drove the level of stock prices. And as it happens, that's exactly what we find: stock prices, particularly those related to health companies, pulled the entire S&P 500 index upward on the day with the election of Scott Brown to the U.S. Senate from Massachusetts, greatly diminishing the chances of the Democratic Party's health care reforms passing through the U.S. Congress in their current form.

And since these kinds of news-driven noise events are short-term events, this also explains for the gap down on the following day, as the principal signal driving stock prices would not be denied!

But after that point, we see that the direction of dividend futures bear little pressure on stock prices. This observation eliminates the fundamental force that drives the stock market from being a contributing factor to the change in stock prices for the rest of the week.

Obama's Proposed Restrictions on Banks: Here, we find from a cached version of The Political Schedule that President Obama delivered his remarks on financial reform at 11:40 AM on Thursday, 21 January 2010, too late to have triggered the sudden sell-off that began at 10:20 AM and ended by 10:34 AM.

We should also recognize that by the time President Obama delivered his remarks, they were old news. The New York Times had posted the story at 2:26 AM, some eight hours in advance of the market's reaction.

While it may be possible that President Obama's proposed banking restrictions are contributing to a negative sentiment among investors, which may have contributed to lower stock prices, we find they had no role in triggering the sharp decline on 21 January 2010 at 10:20 AM and only a slight impact, if any, for the rest of the day or the days that followed.

The Renomination of Ben Bernanke: Given the influence of the Fed Chairman over the U.S. banking and financial industries, as well as the U.S. economy, there's little question that even a hiccup in the renomination of Ben Bernanke to fill this role would greatly affect investor sentiments, which Warren Buffett confirmed in a CNBC interview that morning. The question though is what news about Bernanke's renomination possibly hitting a snag might have occurred to knock stock prices off their perch?

As it happens, we found what appears to have been the specific trigger for the otherwise unexplained sudden sell-off on Thursday, 21 January 2010. Using Google's cache, we found a Reuters news flash that hit its mobile network at 10:18 AM on 21 January 2010 (Reuters has since removed the headline from the mobile network - Update 1 February 2010: Here's the original news headline flash, which was posted on Reuters' network at 10:17 AM), with the headline "Senate won’t vote on Bernanke this week: aide". The rest of the story wasn't fleshed in until 12:44 PM, however, we believe this headline flash directly sparked the sell-off at 10:20 AM, just two minutes after the headline broke. That two minutes then is all the time it takes for the stock market to react to significant news breaking that it wasn't previously expecting! (Update 1 February 2010: Make that three minutes - we found the original headline that posted at 10:17 AM on 21 January 2010.)

On a side note, reading the transcript of Warren Buffett's interview, we can't help but feel sorry that he didn't get his day's worth of notice that Bernanke's reconfirmation was running into some trouble!

We also note that the continuing decline in stock prices observed on Friday, 22 January 2010 would also appear to be largely influenced by news of political obstructions to the Fed Chairman's renomination, as several U.S. Senators indicated they would not support Bernanke's continuation in the role during the day. The effect of this news is very evident in Intrade's prediction market for Chairman Bernanke's renomination.

Scanning the world's news, we see that this news from China certainly does appear to have affected stock prices in Australia, the story for which was posted by the Wall Street Journal at 6:04 AM, as this cached version of Global Fundwire's headlines indicates. With such an early headline, before the U.S. stock market opened at 9:00 AM on 21 January 2010, this news would have affected the level of stock prices at the opening. Instead, we see that U.S. stocks gapped slightly up from where they closed on Wednesday, 20 January 2010, and were largely flat until they plummeted at 10:20 AM. The news from China simply wasn't a factor in the sell-off of U.S. stocks on Thursday, 21 January 2010.

And there you have it! We find that the change in stock prices on Wednesday 20 January 2010 to be a delayed reaction to a small change in the fundamental driver of stock prices, which was put off from occurring sooner by the outcome of the special election for the U.S. Senate in Massachusetts, while the more dramatic plunge in stock prices on Thursday, 21 January 2010 was sparked by the reaction by investors to the unexpected news that Federal Reserve Chairman's renomination to the post was going to be delayed.

We also find that the stock market reacted efficiently to the news, with the Reuters headline providing just a two-minute warning to investors to sell stocks.

As a noise-driven event however, we believe that this drop in stock prices represents a short-term buying opportunity, as we find that all such news-driven noise events in the stock markets have expiration dates.

Update: Cool! We checked Seeking Alpha's market currents timeline for market activity on Thursday, 21 January 2010 - here's what they indicated for the plunge in stock prices:

It looks like they were looking in the wrong place!

Update 28 January 2010: The buying opportunity existed briefly from Friday, 22 January 2010 through Tuesday, 26 January 2010 (such is the nature of noise). The market has bigger worries now that oil-producer Valero has acted to cut its dividend, while tech stocks are being hammered with Motorola's small profit on poor sales suggesting that the industry might underperform investor expectations. We'll need to see how things look after the dust clears on the dividend side to know how the fundamental driver for the market is being affected, but right now, it looks a lot like noise.