What do you call a market which rises on bad news and panics — as it's doing today — on no news at all? The 10-year Treasury is now yielding less than 3%, the Dow's back below 10,000, the VIX is over 30, and the Nasdaq is down 2.4% in a matter of minutes; French stocks have fallen more than 3% today, and in general the global risk-aversion trade seems to be back on.

Interestingly, gold is down a little today: maybe at these levels it's more of a risk asset than a safe haven. But more generally I think we're seeing what happens to markets which are much more global, complex, and interconnected than they’ve ever been in the past: correlations can appear out of nowhere, and it's silly to even attempt to explain significant intraday market movements by recourse to anything in the news.

That didn't stop reporters like Angela Moon from trying to pin the blame for the drop in stock prices on a sharp decline in consumer confidence in the U.S., but that reporting misses the rather obvious point that all the indices started the day in the "pit of despair," as stock price futures were down well before any of the consumer confidence news hit the airwaves.

So how do we know that something fundamental is behind the action in the market on 29 June 2010? It turns out that's a simple question to answer. It's because the market is behaving as though it is! 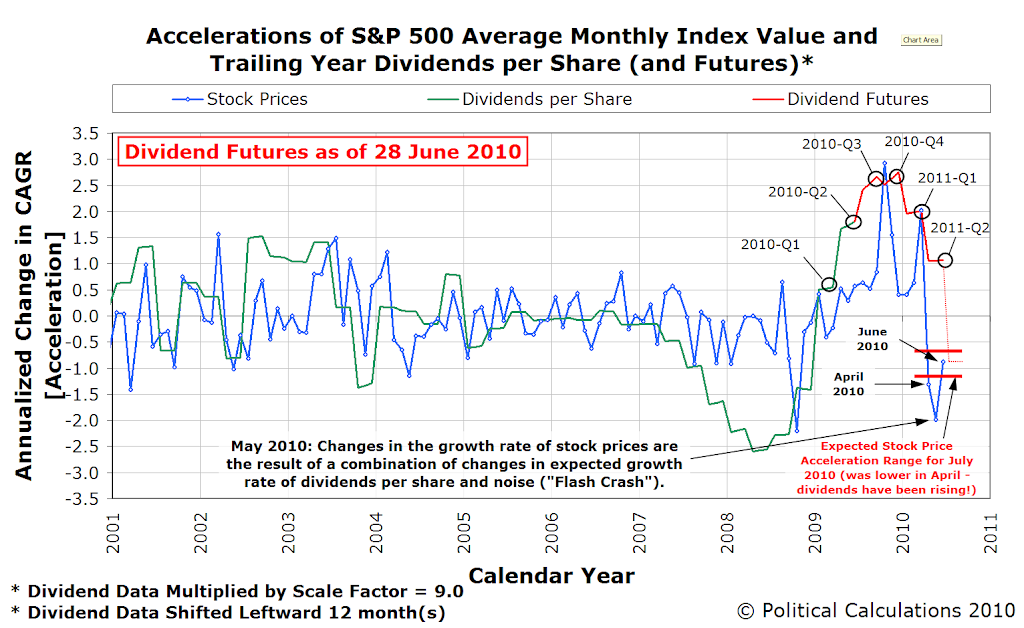 What we think is going on is that investors have shifted their forward-looking focus in time for setting stock prices to be one or two quarters further forward in time than 2011-Q2, the most distant future quarter for which we have dividend futures data, which we've indicated in the chart above by the dashed red lines.

Using the expected change in the rate of growth of the S&P 500's dividends per share for 2011-Q2 as a base reference point, investors are acting as though they expect the S&P 500's dividends per share to fall to $23.31 from the $23.57 currently expected to be reached in June 2011. We won't know for sure that's the case until the distant futures data for 2011-Q3 and 2011-Q4 becomes available, but for now, it's the best we can do with the data we do have available to us [1].

If those figures hold, they would indicate that investors anticipate that the U.S. economy will enter back into a recession, or at least into microrecession, in the latter half of 2011. The expected negative acceleration of dividends per share then would largely be responsible for the decline we've observed in stock prices since April 2010.

For July 2010, assuming investors maintain their focus on whatever future quarter in 2011 that produces this negative acceleration, we can expect average stock prices for the S&P 500 to average somewhere in the range of 1014 and 1052, with 1033 as the effective midpoint of the range.

[1] Our regular readers will recall that we first did a similar exercise to anticipate that the stock market was about to begin its downward descent back on 4 May 2010, where we used the then most distant future available data from the fourth quarter of 2010 as the reference point in time from which to project where dividends would need to be to coincide with where the acceleration of stock prices suggested it might be.

We found back then that to produce the same deceleration from that highly elevated level of positive acceleration, dividends per share would have to drop to $20.88 from 2010-Q4's projected $21.88 per share to produce the equivalent negative acceleration. The difference in the projected dividend we calculate now as compared to then is entirely attributable to the different reference points we used from which to base our calculations along with minor changes in the expected future level of dividends that have taken place in the time since.

Ironically, the level of dividends per share have generally been rising over much of that time. However, it's what the expected acceleration of dividends per share at specific points in time where investors have focused their attention that matters when it comes to projecting where stock prices will be in the very near future!