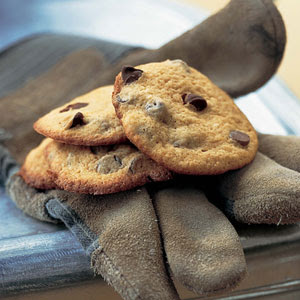 What would happen to your weight if you added a tasty chocolate chip cookie to your daily diet without making any other changes? So you don't exercise any more than you do today and you keep eating everything else that you're eating today. Except for that extra 210 calorie chocolate chip cookie.

Your weight would go up, right? In fact, there's a pretty well-known relationship between net calories consumed and changes in body weight than should be able to tell us by how much. That relationship tells us you will gain one pound for each additional 3,500 net calories you consume above what it takes to maintain your weight at a constant level. Likewise, you should expect to lose one pound for each 3,500 fewer net calories you consume with respect to what it takes to keep your weight steady over time.

As you might expect, the entire weight loss industry is largely built around this basic relationship. The only problem is that it the math behind the relationship doesn't work in real life.

What happens in real life is that your body's metabolism will adjust over time to compensate for the additional calories you're consuming, in such a way that the amount of weight you might gain will be much smaller than what that 3,500 calories = 1 pound relationship would predict.

Weight-gain and dieting math have been upended by a series of recent studies that call into question a longstanding rule of thumb, namely that consuming or cutting 3,500 calories leads to a gain or loss of one pound. This rule of thumb works well in the short term, and with small shifts in weight, but as I write in my print column this week, the rule breaks down over long periods, because as a person's weight changes, so does the body's energy needs.

"That equation might work very well to understand weight change over a few months," pediatrician David Ludwig, director of the Optimal Weight for Life Program at Children’s Hospital in Boston, said of the 3,500-calorie rule. "It works much less well over a few years. And it's meaningless over a decade."

How meaningless over a decade? The following image from Bialik's print column illustrates the difference between what would be predicted using the 3,500 calorie = 1 pound formula versus what research indicates really happens in the case where a 188 pound, 5 feet 10 inch tall man adds that 210 calorie cookie to his daily diet:

Rather than gaining 132 pounds in six years, the cookie-eating man's metabolism would adjust to limit the weight gain to 25 pounds, most of which would be gained in the first three years. That's still a hefty increase in the individual's weight, but nowhere near what the standard diet math says it should be.

The bad news is that the same limiting factors apply to weight loss as well. After a certain point, permanently removing a fixed amount of calories from one's diet will not help lower one's weight beyond a certain point. Bialik reports:

Martijn Katan, a nutrition scientist at Amsterdam's VU University and co-author with Ludwig of a recent paper on the new nutrition math, compares the dynamics to that of a jet fighter. Fill its fuel tank halfway, and it will fly more than half the distance it would have with a full tank, because there is less weight to support. "That's what happens with humans, too," Katan said. Dieting "becomes a self-defeating process," as a lighter frame requires less energy and therefore fewer calories to support it.

Katan's observation pretty much agrees with the experience of nearly all those who have lost weight through dieting during the last several decades. Amazing that science is finally beginning to catch on that more complex things are happening where calorie consumption and body weight are concerned....