In 2003, Congress enacted across-the-board cuts in the tax rates paid by all income earners in the U.S. that are set to expire at the end of 2010. Many have been expecting that the current Congress would act to keep tax rates where they were set for those at the lowest end of the income spectrum, while letting rates go back to their pre-2003 levels for those at the highest end.

What if they're wrong and the current Congress chooses not to act? After all, it's not like they're going to get around to passing a budget in 2010, so why not also take another pass on the opportunity to keep tax rates low?...

That's the possibility we're looking at today in considering what the raw impact would be if, rather than reining in excessive spending, the 111th United States Congress instead opts to attempt to reduce the annual federal government budget deficit by doing nothing to stop all the 2003 tax rate cuts from expiring. 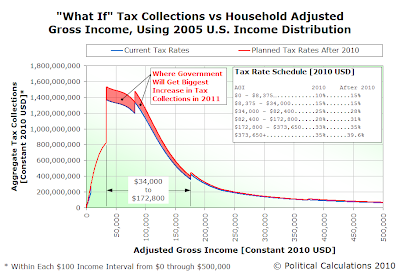 Our first chart shows where the greatest impact will fall, assuming the tax rates for single taxpayers. Here, we find that individuals earning between $34,000 and $172,800 in 2010 U.S. dollars would collectively be compelled to pay the largest portion of the increase in tax collections that will result from the expiration of the 2003 tax cuts.

We estimate that roughly 77-78% of any additional federal income tax collections resulting from allowing all the 2003 tax rate cuts to expire will come from individuals with annual earnings between these income thresholds.

Breaking that down to consider the individual impact, individuals with household earnings from $34,000 up to $82,400 would see the raw amount of taxes they would have to pay go up by approximately 12.0% compared to what they would have had to pay under the U.S. tax law of 2010, providing about 38% of the increase in federal income tax collections. Those earning from $82,400 up to $172,800 would see their total tax bill rise by 10.7%, providing over 39% of the total increase in aggregate tax collections.

The disproportional burden falling collectively upon middle income earners from the additional taxes that will be collected in 2011 may be attributed to their larger numbers with respect to higher income earners. 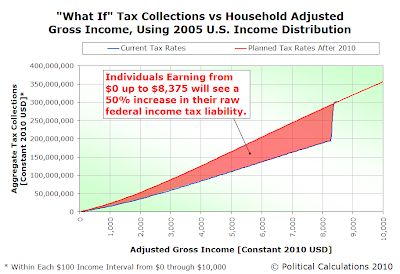 Remarkably, those with incomes running from $8,375 up to $34,000 will see no change in their raw tax bill with the expiration of the 2003 income tax rate cuts.

But the individuals who will see the greatest proportionate tax increase will be those earning anywhere from $0 to $8,375 per year. Our second chart takes a closer look at just this lowest segment of the income-earning spectrum.

What we see is that the poorest individuals in the United States can expect to see their raw tax liability rise by 50% in 2011 should the current Congress choose to allow the expiration of the portion of the 2003 Bush tax cuts affecting these individual income earners.

For that additional burden, these poorest American taxpayer will add less than 2% to the total of additional taxes that might be collected beginning in 2011.