On 17 June 2010, the Obama administration officially kicked off "'Recovery Summer,' a six-week-long focus on the surge in Recovery Act infrastructure projects that will be underway across the country in the coming months – and the jobs they’ll create well into the fall and through the end of the year." We thought we'd focus our monthly analysis of the employment situation in the United States on how well the President's 2009 economic stimulus package, which provided the funding for these projects, is doing in creating or saving American jobs. 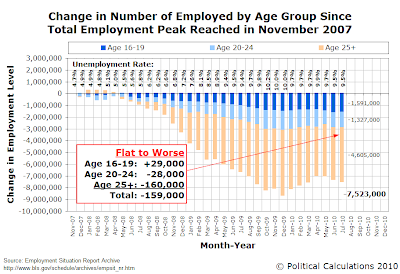 Our first graph considers how the employment levels for teens (Age 16-19), young adults (Age 20-24) and everyone else (Age 25+) have changed since total employment levels in the United States peaked in November 2007 before entering into recession in December 2007.

Here, we find that the seasonally-adjusted number of Americans counted as being employed for each of these age groups has decreased since the summer of 2010 began after the employment situation had improved throughout the spring. Looking just at the month over month change from June to July 2010, we see that the teen employment situation improved slightly, with 29,000 more teens being counted as being employed in July than in June, bringing the total number of teens in the U.S. work force up to 4,315,000. Overall, teens account for 3.11% of the entire U.S. workforce.

The employment situation for young adults and everyone else dimmed however, as 28,000 fewer individuals between the ages of 20 and 24 were counted as having jobs in July as compared to June, while 160,000 fewer people Age 25 or older were counted as still working in the month over month change.

Remarkably though, even though the employment situation in the United States worsened from June to July 2010, the national unemployment rate held steady at 9.5%.

Now, let's compare the month of July 2010 with the last time the U.S. unemployment rate registered 9.5% before June 2010, going back a full year to June 2009. The table below shows how things have changed:

In the year preceding "Recovery Summer," we find that the civilian labor force in the United States has shrunk by 1.37 million people and that the number of employed individuals in the U.S. has likewise dwindled by 1.24 million people. The good news though is that there are 130,000 fewer people counted as being unemployed in July 2010 than in June 2009.

The bad news about that figure is that it indicates that 1.37 million people have become too discouraged over the time from June 2009 to July 2010 to even bother looking for work, which is a requirement that must be satisfied in order to be counted as being unemployed.

If we assumed that the 1,236,000 people who stopped being counted as being employed in the period from June 2009 to July 2010 were unemployed, rather than having been removed or eliminated from participating in the U.S. labor force altogether, we would calculate July 2010's unemployment rate to be 10.2%. We obtain this figure by adding 1,236,000 individuals to both the civilian labor force and to the number of unemployed recorded in July 2010, then dividing the adjusted number of unemployed by the adjusted civilian labor force.

It would then seem that the stimulus package's 787 billion dollars worth of carefully and expertly crafted stimulus spending only succeeded in adding to the American worker's deficit of hope in the past year.