We don't have one yet at this writing, but based on this review of the Activeion ionator HOM Portable Cleaner and Sanitizer, we really want to try one out! First, here's how Core77's hipstomp described the product in the teaser for his review:

ActiveIon's Ionator HOM is a magic cleaning machine. Intended as a replacement for endless bottles of spray cleaner, the large, drill-gun-like device converts regular tap water into an ionized mist that lifts dirt off of surfaces and kills bacteria. There are no chemicals involved.

For two months we've been putting it through its paces in both a home and commercial environment to see how it stands up. Can regular tap water clean what normally requires bleach, ammonia and other chemicals?

The answer is yes, and the device is pretty darn impressive in action.

The only thing standing in our way is that it costs $179.99. That's U.S. Dollars. For what might be described as being a "high-tech spray bottle."

While that's $120 less that what we thought was a rocking deal for a deep cleaner for our carpets, how can spending only one penny less than $180 for a portable cleaner/spray bottle possibly make any kind of financial sense?

The answer lies in the cost of the cleaning agents you would otherwise use to clean around your house. Hipstomp provides a couple of key points of reference:

There were at least two extremely impressive cleaning feats the Ionator performed. The first was in my shower, where a built-up layer of scum coated the tiles. (I want to say I let the scum build up for the purposes of this test, but in reality I'm just a filthy bachelor.) A cleaning job like that normally takes a Scrubbing-Bubbles-like chemical cleaner and a scouring pad. But spraying it with the Ionator, all of the gunk came off the tiles with a single wipe of a regular paper towel. I couldn't believe it.

For comparison's sake I tried doing the other side of the shower with just a regular spray bottle filled with water, and the scum didn't come off at all. It was definitely the Ionator that lifted everything up off of the tiles.

The second surprise was with glass and mirrors. The large mirrors in the photo studio are a pain to clean as they're often covered in the high amount of dust the crews kick up as well as makeup smears and a patina of greasy fingerprints from moving the mirrors around to suit their particular set-ups. I go through tons of Windex to get them clean and streak-free, and it takes forever.

I sprayed the mirrors down with the Ionator and wiped them down with a paper towel, making minimal passes over the same spot, just to see what would happen. Immediately afterwards I was disappointed, because although the paper towels were clearly dirty and had picked stuff up, the mirror was covered in a misty glaze of what looked like microbubbles. But I was astonished when I came back about 30 seconds later to see the mist starting to disappear, and in a minute it was gone completely. The mirror was so freaking clean it looked like it just came out of the factory. No streaks, no dirt, no smudges, and very little effort. 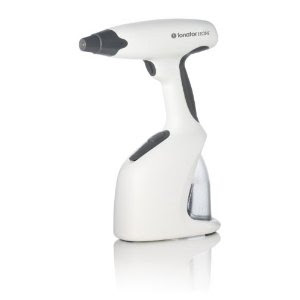 Believe it or not, the math that applies is the same as that we would use to decide whether to rent an item or to buy it instead. Only here, what we're renting (through a series of recurring purchases of cleaning agents) or buying (through a one-time purchase of the ionator HOM) is "cleanliness"!

To help determine whether it makes sense to rent or buy "cleanliness," we're going to once again adapt our tool for determining whether it makes more sense to rent vs buy to apply to this specific situation. Here, the cost of buying "cleanliness" is represented by the $179.99 purchase price of Activeion's ionator HOM portable cleaner and the cost of renting "cleanliness" will be given by the $9.95 price of a single 32 ounce bottle of Windex® Glass Cleaner.

Because we expect consumer prices for cleaning agents to change over time, we've entered the "net rate of inflation" in the tool as being equal to the long-term average rate of inflation for the U.S. of 3.3%. And since a $179.99 purchase is likely to be made on a credit card, we've entered the cost of money as being equal to 10.37%, which is what Bankrate.com currently indicates to be the average interest rate that applies to a low-interest credit card.

And what we find is that if we're going to simply get an Activeion ionator HOM portable cleaner to clean glass surfaces around our house, it makes more sense to just rent (aka "periodically buy") bottles of Windex®.

But then, we wouldn't just be doing that, would we? We'd likely also use it to keep soap scum under control in our showers too. So let's add in the cost of a single 32 ounce spray bottle of Scrubbing Bubbles Soap Scum Remover, Orange Action, which would add $4.49 to $9.95 we're already paying.

That one single change swings the balance in favor of buying the Activeion ionator HOM Portable Cleaner and Sanitizer, as we can expect to come out ahead in the deal, especially if it's likely that we would end up saving the cost of periodically buying other or additional household cleaners!

Note: The Amazon carousel widget below shows the specific products we referenced in this personal financial analysis as well as some closely related products (hold down the arrow keys to make the carousel spin!)

On a final note, hipstomp isn't kidding when he describes the ionator HOM as a "large, drill-gun-like device". From what we can tell from the customer-submitted pictures at Amazon, it does indeed appear to be roughly the size of a cordless drill.

All in all though, that's not bad for what may very well turn out to be the coolest spray bottle for cleaning ever....