Going by the current state of the trend we've observed since 21 November 2009 through 23 October 2010, it will take another 645 weeks before first-time unemployment insurance claim filings fall back to the average level of 317,000 they held throughout the mid-2000s. 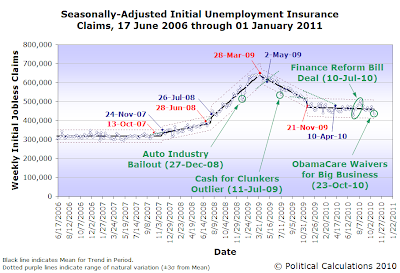 We've updated our chart tracking these first-time jobless benefit claim filings, which we've annotated with events that coincide with significant swings in the data. Or potentially significant, as is the case for the most recent improvement we've seen in this data, which came last week.

As always, we assume there is a two to three week lag between when an event that can affect the employee retention decisions of businesses with when the effect of that change in outlook shows up in unemployment insurance claim filings. This corresponds to the typical pay periods for most U.S. workers, where we assume that any changes take place with the beginning of the next pay cycle for the businesses laying off workers.

The table below identifies the events corresponding to the major shifts in the trend for first time unemployment claims since 17 June 2006:

For the week of 30 October 2010, we would anticipate that these claims will fall in a range between 411,000 and 508,000. Assuming the current trend remains in effect, we should see the overall level of jobless claims fall at a very sluggish rate of 220 per week.