In 2009, turkey production in the United States was decimated. Literally! 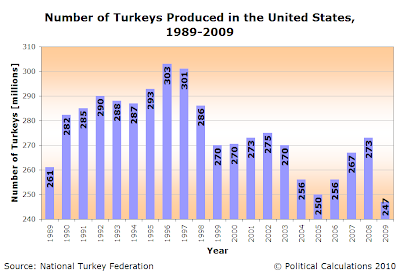 Sure, the U.S. economy was in recession, but what happened to turkey production in 2009 contradicts the pattern we observed in each of the three previous U.S. recessions in 1991, 2001 and even 2008, where turkey production has historically risen to fly in the face of economic contraction.

But then, in 2009, like Ben Bernanke's money or turkeys dropped from a helicopter, they plunged to earth.

The question we have today is why was 2009 different from every other year of recession for which we have data where turkey production and consumption by Americans is concerned? 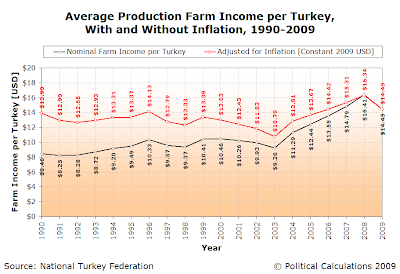 We began by first investigating whether the price of turkeys had suddenly or dramatically risen, which would lead fewer people to buy turkeys. To get an idea of the base price of a turkey, we took data from the National Turkey Federation related to the amount of turkey producer's farm income and divided it by the total turkey production in the U.S. to get an approximate unit price. We then adjusted the values to account for the effect of inflation over time, producing our second chart.

So something changed between 2008 and 2009 to fully reverse the typical pattern we've observed in the U.S. where turkey consumption rises during a recession, seemingly regardless of the change in price.

In our next installment, we'll identify just what that something was. As a teaser, it's not so much of a what, so much as it is a who....

Until then, we can't resist. Here's the classic scene from WKRP in Cincinnati:

See the full episode Turkeys Away at Hulu!