In previous recessions, turkey production and consumption in the U.S. has risen. At least, that was the pattern in 1991, 2001 and even in 2008. But in 2009, something very different happened: both the quantity and price of turkeys plunged as the relative demand for turkeys plummeted.

That change is all the more remarkable because it came just a year after the quantity and price of turkeys in the U.S. had soared on increased demand, even though the U.S. economy had entered into recession nearly a year earlier in December 2007.

Why then was the experience of 2009 so different from 2008? Today, we're going to get to the bottom of that economic detective story.

We've already eliminated the price of turkey itself as being a potential culprit for the massive reduction in the quantity of turkeys produced in 2009. If the price of turkeys had spiked in 2009, we could have then attributed the fall in turkey consumption and its related production to the consumer reaction to extremely high prices, just like what occurred with the price and consumption of oil in the summer of 2008.

But it didn't, so we had to look elsewhere. We decided to take a closer look at the recession itself, to see whether the job loss related to it might be the culprit. After all, nothing kills off consumer demand quite like consumers who have lost their jobs. 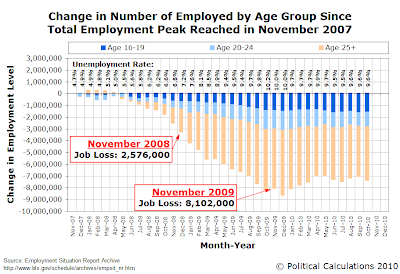 We see that the recession certainly worsened between Thanksgiving 2008 and Thanksgiving 2009, but that doesn't explain why turkey production and consumption would rise by 6 million turkeys in 2008 when 2.5 million fewer people were working, before falling by 26 million in 2009 after an additional 5.5 million people were no longer counted as being employed.

And then it hit us. Looking at the age-related data on the chart, we see that a major shift began taking place beginning in November 2008 in who was no longer counted as working - individuals over Age 25! 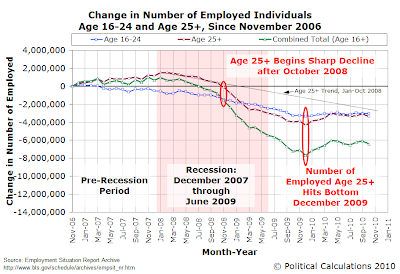 We next combined the teens and young adults into a single Age 16-24 group and charted how their numbers in the workforce have changed over time compared to the Age 25+ group. We then charted the data, going back one additional Thanksgiving for good measure to get a larger sense of the overall trends.

What we find is teens and young adults bore the brunt of job loss in the recession up through October 2008. After October 2008, the employment situation in the U.S. significantly worsened for individuals Age 25 or older.

It's no secret why. October 2008 was the time when massive layoffs began taking place throughout the entire U.S. automotive industry production chain, which was devastated by the sudden change in consumer demand that occurred when oil prices spiked earlier that year.

But that age-based shift in job loss does explain why 2008 saw turkey consumption rise, while 2009 saw it decline dramatically. 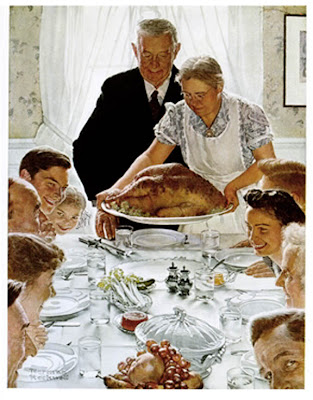 Think about this question: what happens to a teen or young adult who loses their job? More often than not, they either continue to live at home, or in the case of young adults, they might simply move back home to live with their parents until they can find new work.

In both cases, the amount of food that their parents must provide increases. Since teens and young adults are less likely to host a traditional Thanksgiving dinner featuring a turkey as the centerpiece on their own, the amount of turkeys demanded increases as their parents host the annual holiday to feed their expanded households.

But that picture changes when it is the parents who are the ones who lose their jobs in an economic downturn, in addition to their older, working-age children. Suddenly, entire families must cut back, with U.S. turkey consumption falling as one result.

And many American families' Thanksgiving just isn't anywhere near the same.