As many of our longtime readers know, we pay attention to where our site traffic originates. For instance, we know that many of our newest posts are frequently read on Capitol Hill, which makes sense since we frequently take on a number of public policy topics that are related to current events.

Yesterday and today however, a post we wrote back in November 2008 appears to have caught the imagination of one or more people in the U.S. Senate: 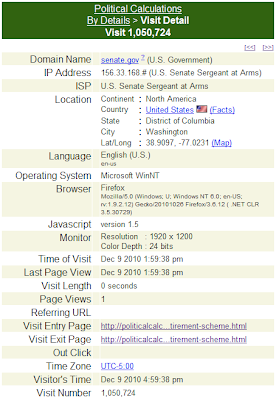 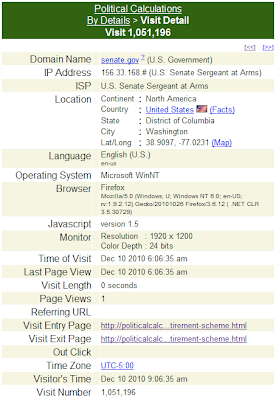 That's scary because of what the post discussed: a proposal supported by leading Democratic Party legislators seeking to eliminate the tax deduction for 401(k) plans in favor of mandating that all working Americans spend 5% of their income on U.S. savings bonds through Social Security for a new "guaranteed retirement account". That forced investment program would be added on top of the other taxes Americans currently pay to support the regular Social Security program.

The government would sweeten the pot by adding $600 per year to each of the "guaranteed retirement accounts."

Here are the two key takeaways we had in analyzing the proposal:

The government would gain from this proposal in two ways. First, by being able to collect tax dollars at the highest marginal rates paid by the former 401(k) investors on their income, the government would expect to see its net tax revenues rise as this amount dwarfs the proposed $600 taxpayer funded annual contribution to each of the individual accounts.

Second, by requiring all U.S. individuals earning incomes to contribute above and beyond what they already do to support the Social Security program, the government would be able to substantially increase the percentage of debt financing it obtains from domestic sources. The government gains by having this larger, captive source of debt financing to support either new spending programs or to substantially expand existing spending programs.

Going by the distribution of taxpayer household income in 2005, we estimated that this forced investment program would add some $315 billion to the U.S. Treasury each year, just from households with annual incomes between $0 and $500,000.

In return, American "investors" would earn a three percent return on their lifelong "investment", without adjusting for the effects of inflation over time. (We put the words "investors" and "investment" in quotes because real investing involves people who are free to make real choices - there would be no real choice or freedom under this proposal).

So at best, assuming zero inflation, Americans would see the value of their government "guaranteed retirement accounts" double once every 24 years.

That our post from two years ago is suddenly being reviewed today indicates that this proposal, or one very similar to it, is being actively considered in Washington D.C.

Given the government's reach into health care, the financial system, the housing market, the auto industry, the insurance industry, et cetera in just the last two years, it appears that having all that under their thumbs just isn't enough to satisfy the insatiable need for money and control in the nation's halls of power.

And so we end with the words we wrote for the title of this post. Be afraid. Be very afraid.

Update 9:10 AM: They're back! Or rather, the ones who read us on a daily basis have begun to pick up on this post: 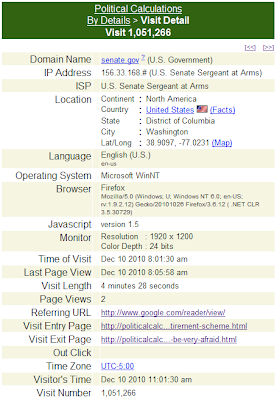 Note the difference in how they got to our post from November 2008. Here, they clearly picked up on our RSS feed through Google Reader, clicking the link to our older post first before clicking to get to this post directly. This is an example of what we would describe as a typical visit from Capitol Hill.

By contrast, there's no Referring URL in the two visits we highlighted earlier in this post. That's usually an indication that someone has come our site after having bookmarked a post previously, typing a link directly, or who perhaps has gone to the trouble to block the referring source. Which means that yesterday afternoon's site visit is not the first time someone working in the U.S. Senate has reviewed our November 2008 post.

Others arriving late might need to start playing some serious catchup....