Political Calculations
Unexpectedly Intriguing!
22 December 2010
The Future for Dividends in 2011

What does the future for stock market dividends look like through 2011?

The two charts we're presenting today, showing what the dividend futures market is signaling is in store for 2011, at least, as of 17 December 2010, reveal that business is set to improve through much of the year. 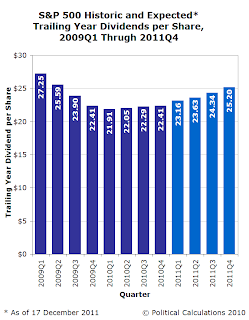 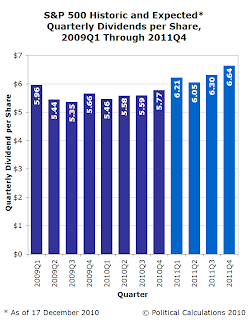 First, looking at the quarterly data, we see that the first quarter of 2011 would appear to be pretty robust - but that's perhaps a bit misleading.

Until this past weekend, when the lame-duck Congress and Obama administration acted to sustain lower taxes through 2012, it was uncertain whether or not the tax rates that would apply to dividends would go up. A number of firms, anticipating much higher taxes on dividends, had been considering shifting the timing of when they would pay their dividends to get around the change in tax rates that would have otherwise have taken effect on 1 January 2011.

Many of these higher dividends payments were slated to be paid out to shareholders in the period covering 17 December 2010 through the end of 2010, which is covered by the dividend futures contract for the first quarter of 2011, which is why the dividends for this quarter would appear to be so elevated.

This outcome suggests that a number of companies were pulling their expected dividend payments from 2011Q2 ahead into 2011Q1 to get around the risk of exposure to higher dividend taxes.

From an economic standpoint however, the currently expected trend in dividends suggests that 2011 will be a better year for U.S. businesses than was 2010.