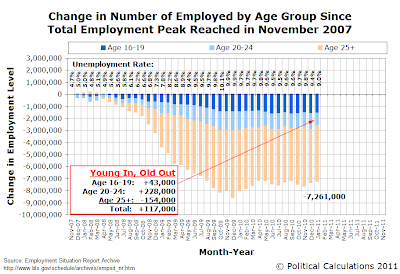 For January 2011, 139,323,000 Americans have been counted as having jobs, which is up by 117,000 from the level recorded for December 2010. Compared to November 2007, when total employment peaked in the United States one month ahead of when the most recent recession officially began, some 7,261,000 fewer Americans are being counted among the employed portion of the U.S. civilian labor force.

And yet, despite no significant or sustained improvement in the U.S. employment situation over that time, the official unemployment rate has seemingly and suddenly improved from 9.8% in November 2010 to 9.4% in December 2010 to 9.0% in January 2011.

The reason the official unemployment rate has fallen so dramatically over that three month span of time, even though the number of employed Americans hasn't meaningfully changed since March 2010, is directly due to a very large number of Americans becoming discouraged and exiting the portion of the civilian labor force who are employed or are actively seeking work.

So it's not that the job situation is getting better, so much as roughly 1.2 million Americans who were looking for work in November 2007 are no longer participating in any meaningful way in the U.S. job market.