Political Calculations
Unexpectedly Intriguing!
March 28, 2011
Jobs Above and Below the Minimum Wage Line

Our regular readers know we periodically experiment with different ways of visualizing data. Today's experiment shows how the number of jobs paying wages or salaries above and below the federal minimum wage has changed in each year since 2006. 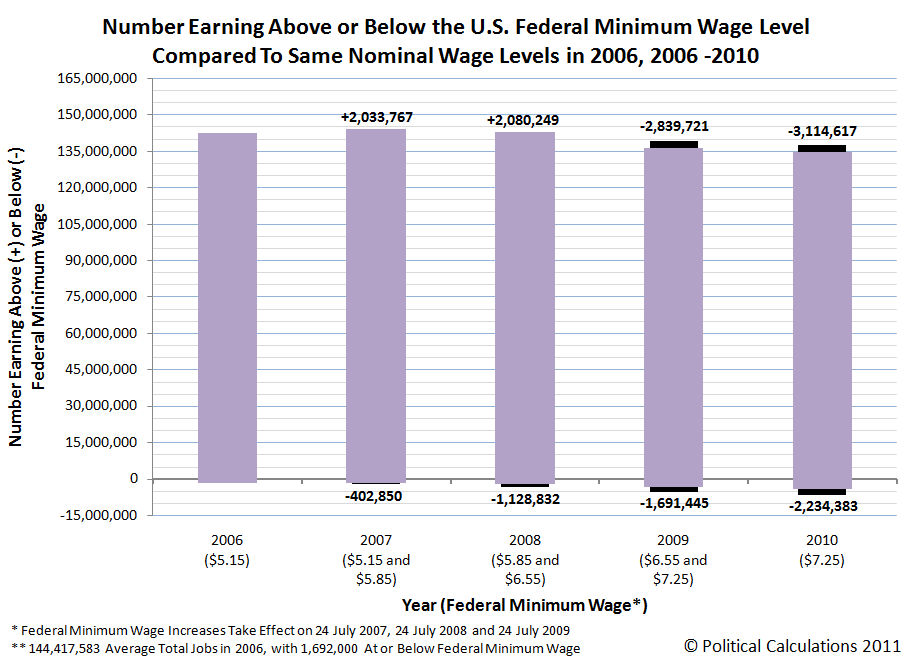 In the chart above, the large purple bands indicate the actual number of employed individuals in the U.S. for each year shown. The black bands that appear either above or below the purple bands indicate the additional number of jobs that existed in 2006 that no longer existed in subsequent years, whether above the minimum wage level (indicated by the horizontal axis), or below it. We then added the numerical data above and below each band to indicate the relative change in the number of jobs either above or below the minimum wage line with respect to the levels recorded at the time-weighted1 indicated wage levels in 2006.

Here's what we see as we read the chart from left to right. 2007, the first year in which we have a federal minimum wage increase, saw 402,850 jobs lost from the U.S. economy below the time-weighted minimum wage level for that year, while the otherwise growing economy added 2,033,767 jobs above the minimum wage line. We know that the jobs below the minimum wage line were lost, rather than shifted above the line, because the number of employed teens and young adults, the individuals most likely to have jobs earning the minimum wage, declined significantly between 2006 and 2007.

Meanwhile, 1,691,445 jobs continued to be shed below the federal minimum wage line for that year, which saw the official end of the recession in June 2009.