Political Calculations
Unexpectedly Intriguing!
31 May 2011
The Return of Order in the Stock Market?

Order may be said to exist in the stock market whenever stock prices are closely coupled with their underlying dividends per share and begin following a stable trajectory over time. When that kind of order exists, stock prices become very predictable because the variation in stock prices with respect to that overall trajectory may be described by a normal statistical distribution.

Although it's taken several months to get enough data to make the call, the stock market began behaving in a very orderly fashion in February 2011. Here's the visual proof that order may have finally returned to the stock market: 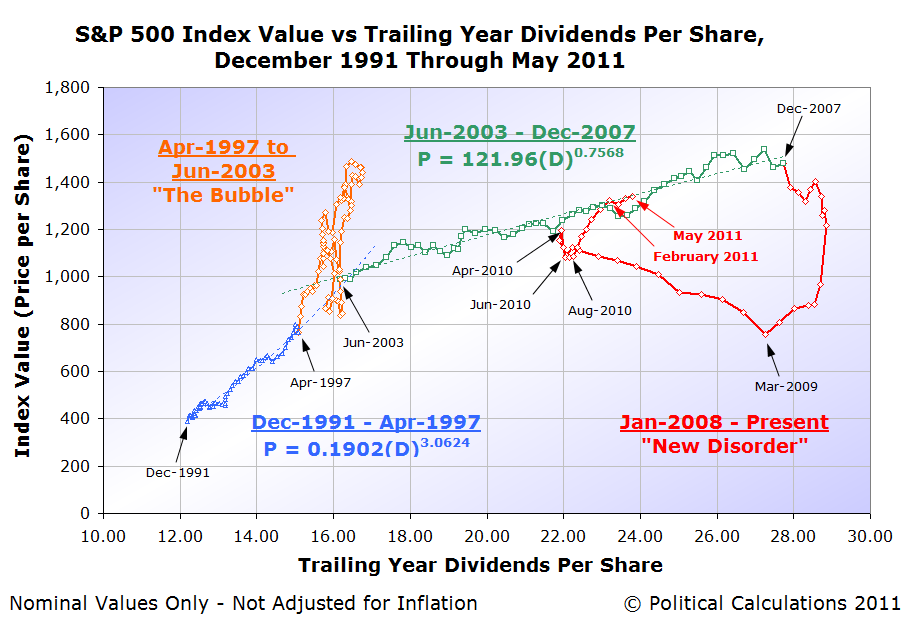 What we see is that after an extended period of disorder that began in January 2008, it appears that order resumed in the stock market three years later, either in January or February 2011.

Even more remarkably, the new period of order appears to be following the same trajectory that defined the previous period of order that existed between June 2003 and December 2007.

How long that condition might last remains to be seen. If the pattern we currently observe holds, and we'll need several more months of data to make that determination, we will be able to use our normal method for forecasting future stock prices.

But is what we're seeing the result of a spontaneous, or natural, emergence of order in the market? Or is it the result of a managed condition, such as the Fed's targeting of stock prices in managing their quantitative easing program, which we speculated might happen in February 2011?

We'll have to take on that question soon....