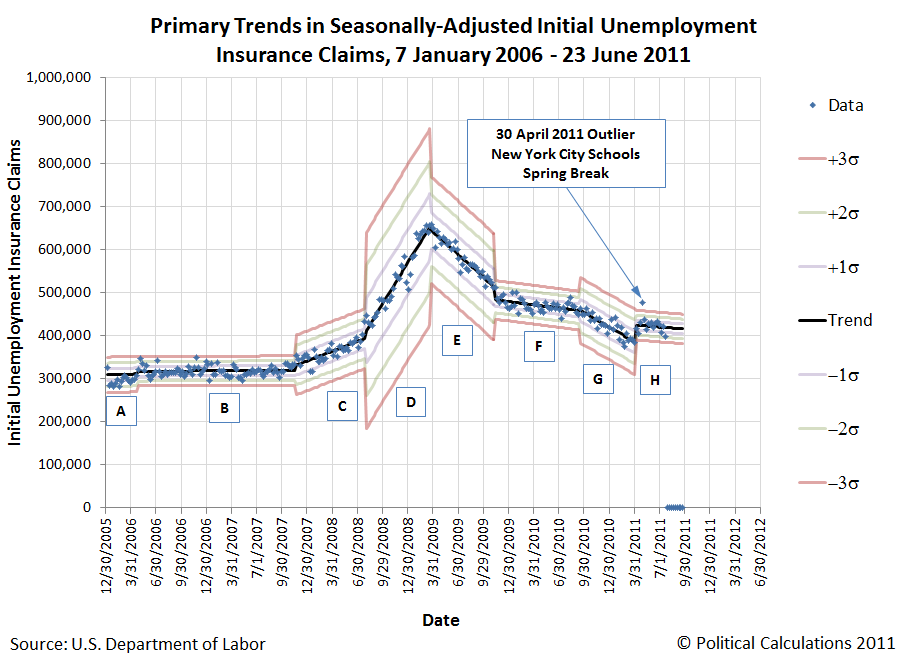 The major trends we observe in the number of seasonally-adjusted initial unemployment insurance claim filings, indicated by the letters in the chart above, are described here.

The shift from an upward (bad) trajectory to a slightly negative (better, not good) trajectory over the past several weeks coincides with the reduction in oil and gasoline prices. The current trend began when employers reacted to a spike in these prices in the spring of 2011, which impacts the both cost of transportation for businesses and the discretionary income of consumers.

We see that in what is now clearly a sudden upward shift in the number of weekly new jobless benefit claims that occurred in early April 2011. Since oil and gas prices peaked in early May, the trend in new jobless claims has been largely flat and through 23 June 2011, may be considered to be falling at an anemic rate of 361 per week.

That's better than seeing the number of new jobless claims rise each week. At roughly the 400,000 per week level however, that's nearly 75,000 per week higher than the 325,000 level that would be consistent with real economic growth.

There is a dark cloud on the economic horizon where these figures are concerned. After having bottomed just above $3.55 per gallon several weeks ago, the national average price for gasoline in the United States has been rising. Now at $3.70 per gallon, this price level suggests that job losses may reverse their current positive falling trend and will begin rising again in the weeks ahead.