If you had to guess, what adjusted gross income range would you say had the biggest gains in the number of households included within that range during the years from 1996 through 2009? Here are the choices:

We won't keep you in suspense. The answer is displayed in the following chart: 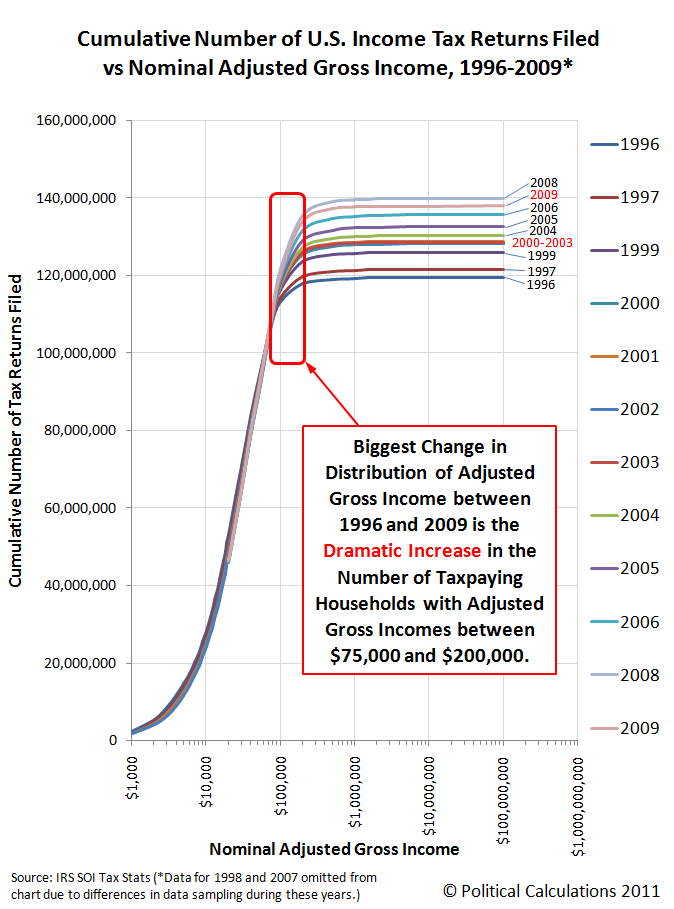 In looking at the chart, you can easily see that the cumulative distribution curves for adjusted gross incomes from $1 through $75,000 are within very close proximity to one another for all years shown on the chart. So much so that these curves essentially overlap each other.

And when you look at households with adjusted gross incomes above $200,000, you can see that this portion of each year's cumulative distribution curve runs nearly parallel with all the others. This indicates that there has been very little change in the number of households counted as having incomes above this level.

But the income range that saw the greatest change from year to year for each year from 1996 through 2009 is that for households with adjusted gross incomes between $75,000 and $200,000.

In fact, if not for the growth in the number of households in this income range, the cumulative income distribution curves would be nearly identical from year to year! How different is that observation from what you've likely heard in the media during all these years?

It is the reduction in the number of households earning adjusted gross incomes between $75,000 and $200,000 that accounts for the majority of any shortfall that existed in the U.S. government's tax collections during these years. And that's something that neither increasing tax rates nor reducing "spending through the tax code" for households with incomes over $200,000 can ever fix.

The numbers just aren't there!