What can international trade data tell us about the current state of the U.S. economy?

Quite a lot, actually! Previously, we found that we can use the change in the growth rate of U.S. imports from and U.S. exports to China to diagnose the economic health of each nation. We found that when an economy is growing, it will draw in a goods and services from outside its borders at a growing rate, while the opposite appears to be true for an economy that is contracting.

The chart below shows what we see for the U.S. and China through June 2011: 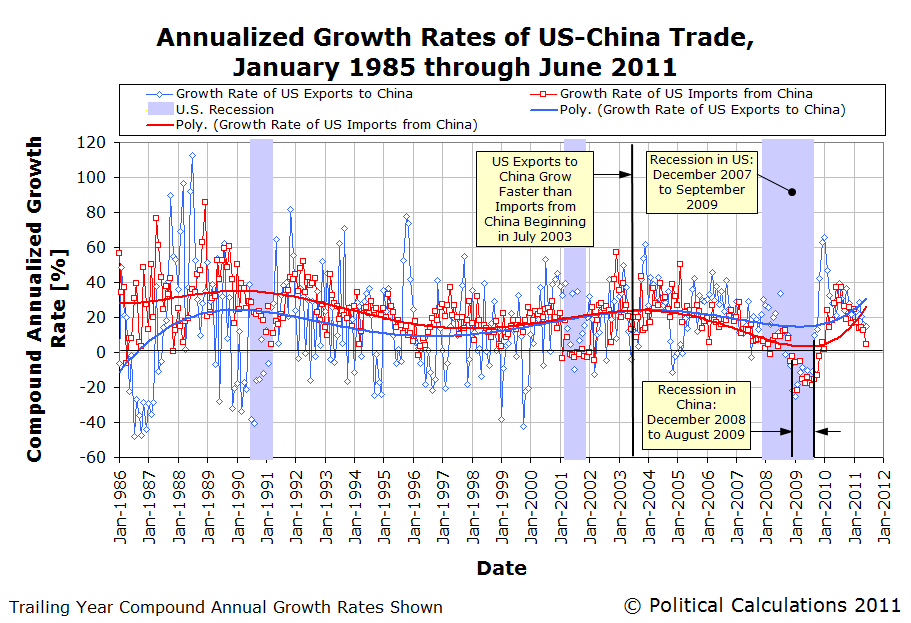 What we observe is that the economies of both the U.S. and China continue to realize slowing rates of trade growth, indicating that both economies are continuing to decelerate. The rate at which China's more strongly growing economy is pulling in goods and services from the United States is falling from the levels recorded in 2010, however the big story is found in the more severely falling level of China's exports to the United States.

We now observe that the growth rate of U.S. imports from China is at near-recessionary levels, confirming the declining economic situation of the United States through the first half of 2011. If we follow the current trend back to its peak, we observe that the decline really began in the middle of 2010.

As we've seen with the current U.S. employment situation, for all practical purposes, there has effectively been no sustained improvement in the U.S. economy since that time.