What's the biggest single factor that determines how much money the U.S. federal government will collect in any given year? 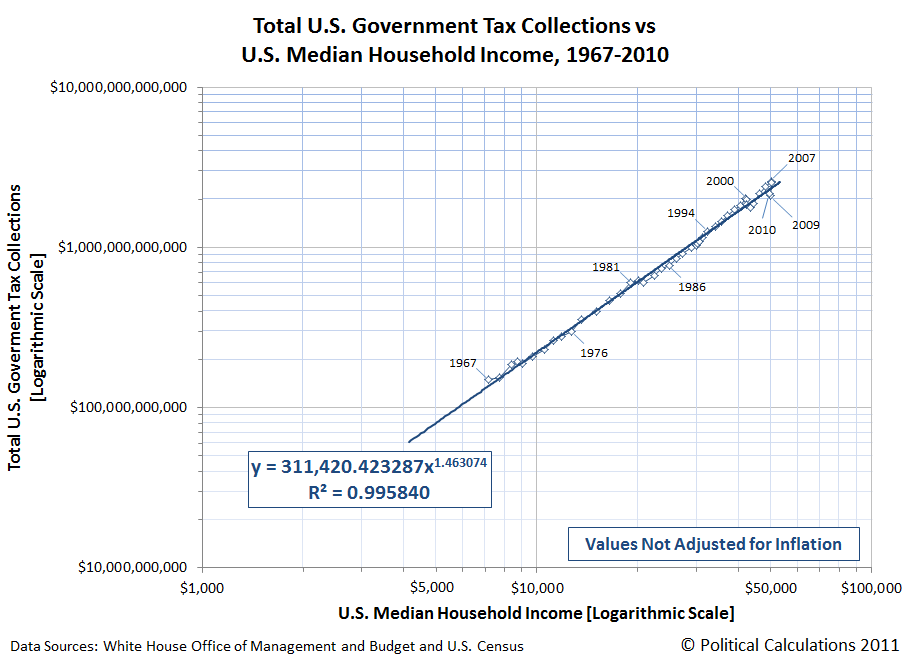 Here, we found that a simple power law relationship exists between the amount of median household income in the United States and the total amount of money that the federal government collects each year, which is why we've opted to show both the horizontal and vertical axes on a logarithmic scale: a power law relationship becomes a straight line when graphed on such a chart.

All in all, given the variation we observe from year to year, the formula we presented on the chart will be accurate to within 12% of the actual amount of money collected by the U.S. government in any given year if you only know the median household income, and often much less than that amount. That's pretty remarkable considering how much, and how often, U.S. income tax rates have changed since 1967.

But then, you don't have to take our word for it. You can use the tool below to do the relevant math for yourself:

And now, you would just need to compare your results with the OMB's historical tables for "Total Receipts".

Speaking of variation, most of what we observe in the data may be linked to the economic situation of the U.S. Here, we see the government really raking in high dollar amounts during the inflation phase of economic bubbles (say 1998-2000 and 2005-2007 for example), while recession years see the government raking in much lower amounts, especially during the deflation phase of economic bubbles (2001-2003 and 2008 to the present.)