How dependent has the United States government under President Barack Obama become upon borrowing money from foreign sources to support its spending?

Would you believe the answer is: "enough to exclude a long-time U.S. manufacturer from consideration for a defense contract in favor of a foreign-based manufacturer, despite the U.S. manufacturer having invested considerable time and profits earned from their other products to develop a product that specifically satisfies the government's needs?"

The U.S. Air Force has apparently chosen the Embraer Super Tucano to meet the Light Air Support (LAS) requirement. Hawker Beechcraft's AT-6 was the other contender. No official announcement has yet been made, but Hawker Beechcraft said it received a letter from the USAF that excluded the AT-6 from the hotly contested competition. The company is protesting the decision to the U.S. Government Accountability Office (GAO).

The LAS competition was designed to produce an alternative to jet combat aircraft for counter-insurgency operations. The Air Force planned to buy 15 aircraft for a training school at Eglin AFB, Fla., but had not confirmed plans to equip any of its own squadrons.

However, the U.S. was expected to supply or sell LAS aircraft to various countries, starting with 20 for Afghanistan. It was this potential that led Hawker Beechcraft and partners to spend “more than $100 million to meet the Air Force's specific requirements,” the company said.

Last month, Hawker Beechcraft completed weapons drop tests with the AT-6, a modification of the successful T-6 primary trainer on which all U.S. military pilots graduate.

Meanwhile, Embraer teamed with Sierra Nevada Corp to offer the EMB-314 Super Tucano, and said it would assemble the aircraft in a new facility at Jacksonville, Fla.

Manufacturing.net carries the Associated Press' article, which describes the size of the contract, as well as the Hawker Beechcraft's investment in its AT-6 program (emphasis ours):

WICHITA, Kan. (AP) -- The Air Force has notified Hawker Beechcraft Corp. that its Beechcraft AT-6 has been excluded from competition to build a light attack aircraft, a contract worth nearly $1 billion, the company said.

The company had hoped to its AT-6, an armed version of its T-6 trainer, would be chosen for the Light AirSupport Counter Insurgency aircraft for the Afghanistan National Army Corps. The chosen aircraft also would be used as a light attack armed reconnaissance aircraft for the U.S. Air Force.

Hawker Beechcraft officials said in a news release that they were "confounded and troubled" by the Air Force's decision. The company said it is asking the Air Force for an explanation and will explore all options.

Hawker Beechcraft said it had been working with the Air Force for two years and had invested more than $100 million to meet the Air Force's requirements for the plane. It noted that the Beechcraft AT-6 had been found capable of meeting the requirements in a demonstration program led by the Air National Guard.

It's all the more remarkable because the U.S. company has been laying off its workers given the current economic climate.

By contrast, Hawker Beechcraft's competition for the defense contract, Brazil's Embraer, is under investigation by the SEC into possible corrupt practices. The Wall Street Journal's Paulo Winterstein reports:

Brazil's Embraer SA, the world's No. 4 aircraft maker, said Friday that an investigation by the U.S. Securities and Exchange Commission into possible corrupt practices shouldn't hurt the company's chances of selling planes to the U.S. military.

The company said Thursday that it was subpoenaed by the SEC, but Chief Executive Frederico Curado said Friday the investigation in itself shouldn't affect its ongoing bid to sell Super Tucano aircraft to the U.S. Air Force. Mr. Curado said he expects the government to announce a decision within "weeks" on a contract reportedly valued at $1.5 billion.

"This is a new process for us but as far as we understand it, the investigation won't have an impact," he said in a conference call with journalists. "Restrictions in dealings with the U.S. government would come only after a conviction."

Embraer said that the SEC and U.S. Justice Department are investigating possible breaches of the U.S. Foreign Corrupt Practices Act, which prohibits company officials from making payments to government officers to get or keep business. The company declined to give details beyond saying that the investigation is related to Embraer business dealings in three countries.

So how does the United States' federal government's need to borrow large amounts of money from foreign sources perhaps come into play in stacking the deck against of a mid-size U.S. manufacturer against the fourth-largest maker of aircraft in the world for a U.S. defense contract? 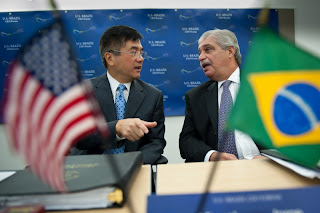 As the fifth largest major foreign holder of U.S. debt, one whose share of that debt has been growing consistently for several years, the Obama administration may well have made a strategic decision to favor Brazil's Embraer company as a reward for Brazil's growing ranking among all foreign holders of U.S. government-issued debt.

With a good portion of Embraer's Super Tucano aircraft being manufactured outside the United States, the move will increase the U.S.' trade deficit in goods and services with Brazil, which in turn, will be balanced by the U.S. government's "export" of U.S. Treasury securities to Brazil.

The move is strategic because developing Brazil as a major holder of U.S. government-issued debt would offset China's outsize influence over the United States given its status as the largest foreign holder of U.S. Treasury securities. Since China has previously flexed its muscles with respect to its interests through the markets for U.S. Treasuries, the Obama administration is likely seeking to reduce its potential influence.

That influence is substantial. Through the end of September 2011, the U.S. Treasury reports that China holds $1.15 trillion in U.S. government-issued securities directly, and another $109 billion indirectly through Hong Kong. Meanwhile, a very large portion of the United Kingdom's reported U.S. government debt holdings of $421.6 billion are actually controlled by Chinese interests. The figure currently recorded for the U.K. is largely a consequence of the nation's position as a major international banking center, which will be revised in several months time to reflect actual holdings by nation.

The bottom line is that if a comparatively small U.S. manufacturer of airplanes with a major investment in its future to develop an aircraft that can do what the U.S. government wants and can demonstrate that's the case needs to be pushed aside in favor of a foreign manufacturer with considerable ethical issues regarding its business practices, and if doing so will help it borrow more money to spend, then that's what the Obama administration will do.