In terms of jobs gained, October 2011 appeared to be the best month for young adults (Age 20-24) since the United States economy peaked before entering into recession in December 2007. 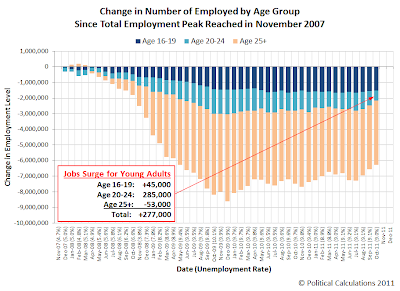 The October 2011 Employment Situation Report indicates that the number of employed individuals between the ages of 20 and 24 increased to 13,357,000, up 285,000 from the previous month.

As such, we strongly suspect that gain in the number of employed is somewhat of a statistical outlier, perhaps strongly affected by sampling errors in the surveyed data. We're not certain however, given that almost all of the improvement in the past several months has been concentrated within this age grouping.

If it is a real phenomenon, we'll have to ask why have individuals in this age range have seemingly and suddenly become so attractive to employers, especially as compared to individuals of all other ages? A ramp up in part-time hiring in advance of the holiday shopping season might explain it, but if that's the case, we can look for lots of disappointment beginning in early 2012 if the economy begins sputtering as expected.

Speaking of individuals in of all those other ages, the October 2011 jobs data for teens (Age 16-19) and adults (Age 25+) was much more lackluster. Teens saw their numbers in the U.S. workforce increase by just 45,000, while adults saw their numbers fall by 53,000.

On the whole, October 2011 saw a net gain of 277,000, with the overall unemployment rate falling to 9.0% from 9.1% in September 2011. We'll know as early as next month if the data for young adults this month is real or if other factors have influenced the recorded data.