Today's news that the number of initial claims for unemployment insurance benefits being filed for the week ending 26 November 2011 ticked back up over the 400,000 mark is right on track with the prediction we published over a month ago.

In fact, what we can expect as we go forward in time is that we'll see an increasing number of times in the weeks ahead where the number of new jobless benefit claim filings will fall below the 400,000 mark, as the number of layoffs from U.S. employers each week continues to decline gradually.

Lo and behold, that's pretty much exactly what has happened so far in the time between 21 October 2011 and today, as shown in our chart below, which adjusts the trend line slightly: 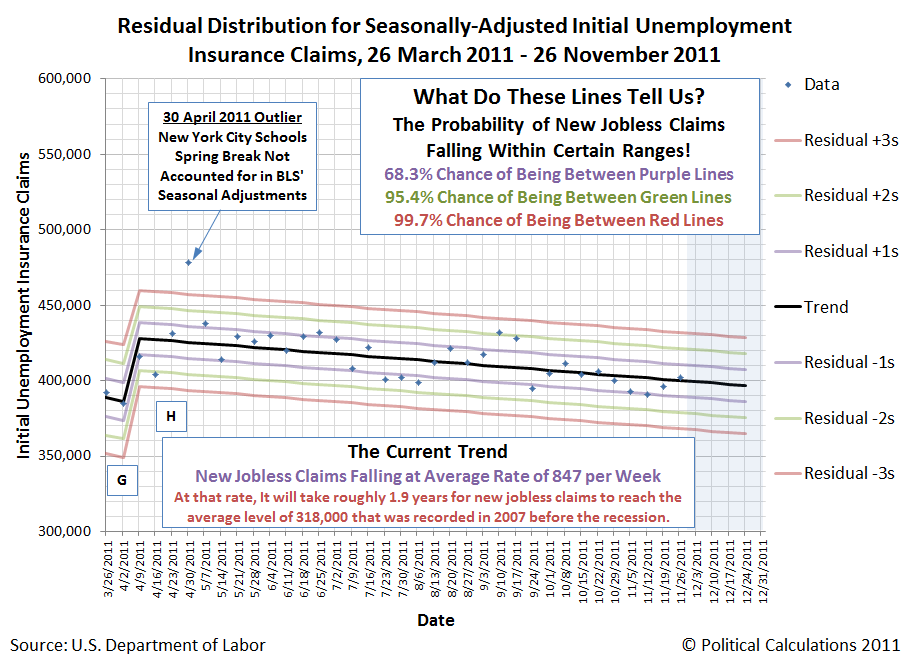 For the six most recent observations of the number of new jobless claims, which cover the period of time since we made our prediction, three have been at or above the 400,000 mark, while three have been under.

We also see that the mean trend line has shifted to be slightly steeper, which suggests that the number of initial unemployment insurance claim filings each week will be more likely to fall under the 400,000 mark in the weeks ahead.

Meanwhile, Bloomberg reports that the uptick in new jobless claims is "unexpected":

Jobless claims climbed by 6,000 to 402,000 in the week ended Nov. 26 that included the Thanksgiving holiday, Labor Department figures showed today in Washington. The median forecast of 43 economists in a Bloomberg News survey called for a drop to 390,000. The number of people on unemployment benefit rolls and those getting extended payments increased.

Whoops! There's 43 economists whose forecasting ability is now in doubt, which is a shame because the number of new jobless claims filed each week is perhaps the easiest of all economic data to forecast while its basic trend is intact!

And at present, it appears that the current trend for weekly new jobless claims remains well in force.