We're following up our look at the payroll and income tax withholding plight of Single tax filers today with a look at the plight of those who have their income taxes withheld at the IRS' initial 2012 married tax rates: 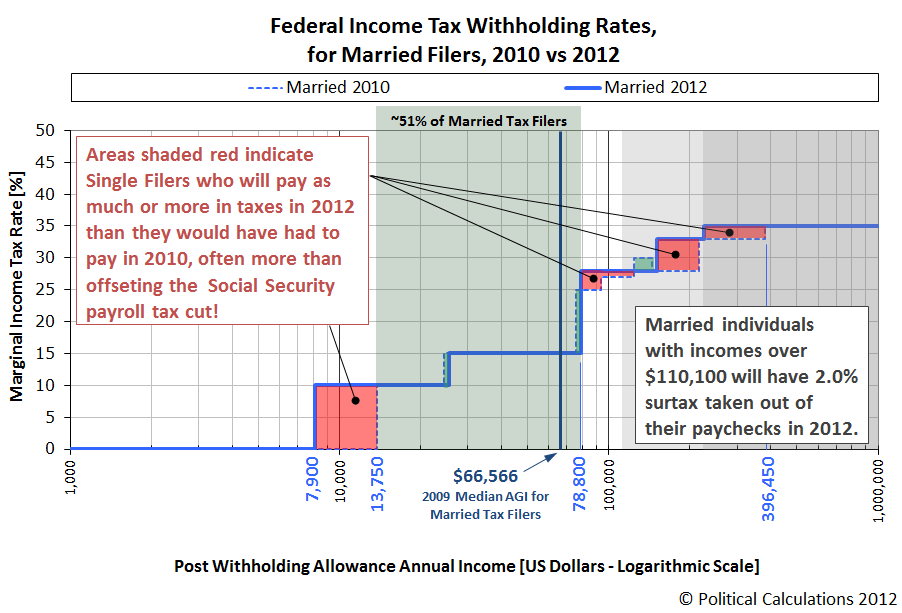 Once again, we're comparing the initial tax withholding rates for 2012 against those that applied in 2010, the last year before the employee's portion of the Social Security FICA payroll taxes of 6.2% of the employee's income was "temporarily" reduced to 4.2%.

What we find is that the benefits of extending the Social Security payroll tax cut into 2012 is limited to roughly 51% of those who might choose the Married filing status for their federal tax withholding, namely those whose incomes might fall between $7,900 and $78,800.

For all practical purposes, no individual who has their taxes withheld under the Married filing status whose income equals or exceeds $78,800 can expect to see any meaningful increase in their take-home pay with respect to what they might have done under the tax withholding rules of 2010. The increase in the income tax withholding rates will offset the reduction in they might otherwise see from the payroll tax cut.

In the chart above, we've used two different shading levels to indicate the range of incomes for which the 2.0% income surtax incorporated into the December 2011 temporary payroll tax cut extension might apply.

All in all, we're not sure it's worth forcing Social Security to run more deeply in the red for the sake putting a smidgen more take-home money into just 51-53% of American income earners' paychecks. It would benefit way more people, and put way more disposable income into the economy, if the federal government would let the temporary Social Security payroll tax cut expire and cut regular income and withholding tax rates across the board by 2-3% instead.

But if nothing else, at least we now know that President Obama's definition of who is "rich" really starts at $37,500 for single tax filers and $78,800 for married tax filers.