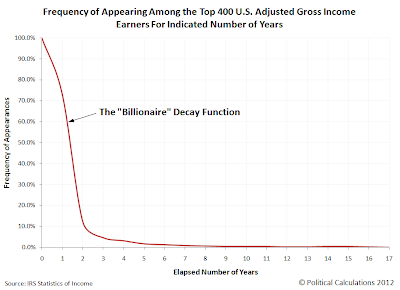 Previously, we built a tool to calculate the probability that an individual could keep earning at least $1 million dollars annually after having done it once.

Today, we're headed for the stratosphere of annual income earners to see just how long they can expect to stay on top after they become one of the Top 400 taxpayers in the United States!

Running the numbers, compared to just making one million dollars in a year, it's a lot less likely that a U.S. taxpayer will make the Top 400 of all U.S. taxpayers more than once! In fact, after 17 years, the IRS data suggests that only one individual made the list in each of the 17 years for which it has been reporting its data.

The IRS notes the high amount of changeover in the Top 400 U.S. taxpayer from year to year:

Over the 17 tax years a total of 6,800 returns were identified for the table. There were 3,672 different taxpayers representing the top 400 returns of each year. Of these taxpayers, a little more than 27 percent appear more than once and slightly more than 15 percent appear more than twice (see columns 2 and 3). In any given year, on average, about 39 percent of the returns were filed by taxpayers that are not in any of the other 16 years (see columns 4 and 5). In each year, 4 (or 1.0 percent) of the returns are for taxpayers who can be found in all 17 years. Thus, the data shown in the table mostly represent a changing group of taxpayers over time, rather than a fixed group of taxpayers.

You know what they say - it's nice to make it to the top, but good luck staying there!