According to Nomura Global Economics, there has been a rather dramatic divergence between the "real" and "official" unemployment rate in the United States since 2009. FT/Alphaville's Cardiff Garcia explains (HT: Tyler Cowen):

A chart via Nomura to keep in the back of your head as you eagerly anticipate this Friday's BLS employment situation report in the US: 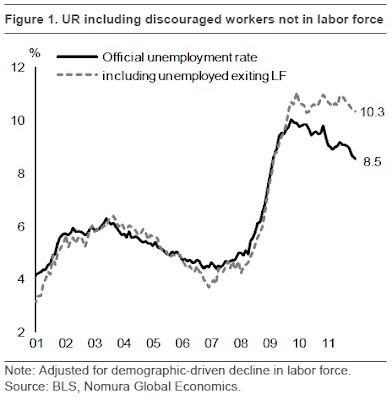 In the grey line, Nomura economists have adjusted the unemployment rate for the number of discouraged workers who have left the labour force and therefore count as unemployed in this alternative measure.

(And yes, they do take into account demographic trends by age group that would influence those leaving, the largest of which is retiring baby boomers. So the right way to understand the alternative 10.3 per cent rate is that it includes those who have left the labour force but not those who, for structural reasons, would have left it anyways.)

Similar variations of this adjusted unemployment rate make headlines now and again. Our colleague Ed Luce, for instance, noted in December that "if the same number of people were seeking work today as in 2007, the jobless rate would be 11 per cent".

But what is striking about the broken line above isn't where it now ends — at 10.3 per cent — but rather the lack of any meaningful, sustained improvement for more than two years.

For those interested in how Nomura calculated its demographically-adjusted unemployment rate, Garcia followed up his initial reporting with more information from Nomura in an update (just scroll down!)

We think we might have the answer: The expiration of President Obama's 99 weeks of unemployment benefits.

To understand why this may be the answer, you have to understand two key things about unemployment benefits: individuals may only collect them if they were laid off from a job and also if they claim they are seeking new employment.

So when individuals who receive unemployment benefits are asked if they are seeking work, as they might if they are surveyed by the Bureau of Labor Statistics, they answer yes - even if they have really given up because their economic prospects are so bad.

Because they say they are looking for work, they are counted as being part of the U.S. labor force, which means they are added to the number of unemployed, which would act to inflate the U.S. unemployment rate above what it would otherwise see.

But when those benefits run out, they no longer need to maintain that fiction, so they don't. The "official" unemployment rate should rapidly fall upon their departure from the "official" civilian labor force after the expiration of their unemployment benefits.

We decided to put that to the test using the month-over-month change in the number of unemployed in the U.S. since November 2007, when total employment last peaked in the United States ahead of the December 2007 recession. The chart below shows the raw data for the overall civilian labor force (the data for which is collected throught the Census/BLS' Current Population Survey) and for the Manufacturing and Transportation & Warehousing sectors of the U.S. economy (the data for which is collected through the BLS' Current Economic Survey), which will allow us to track when layoffs in those industries affected the overall unemployment level: 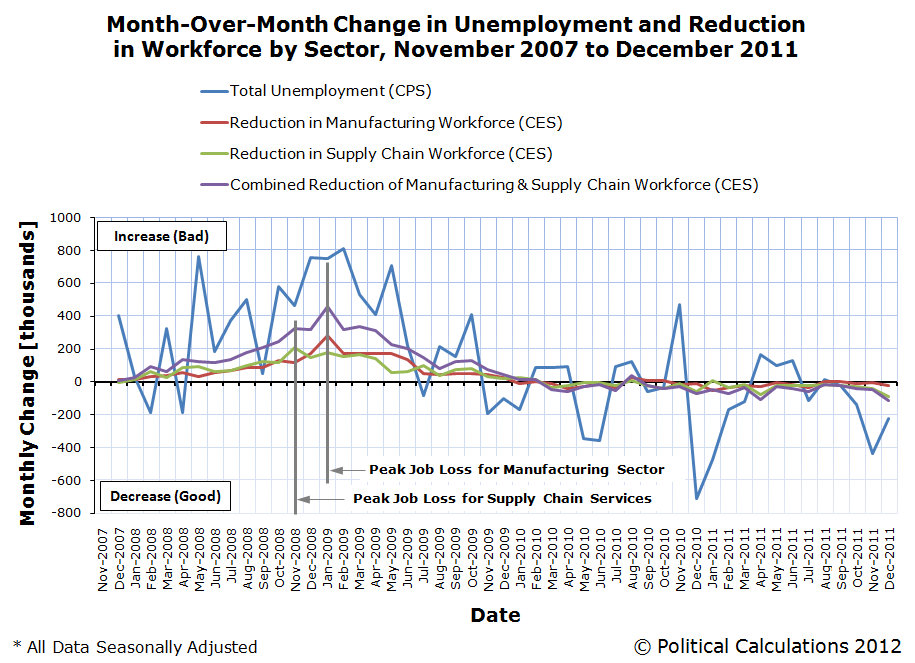 What we'll next do is shift the curve for Total Unemployment some 103 weeks earlier in time. This value would correspond to the expiration of 99 weeks of unemployment benefits, plus an additional four weeks, which would account for the additional time lag for an individual whose unemployment benefits have expired and who would no longer need to claim they are seeking work to be reflected in the next monthly unemployment report. 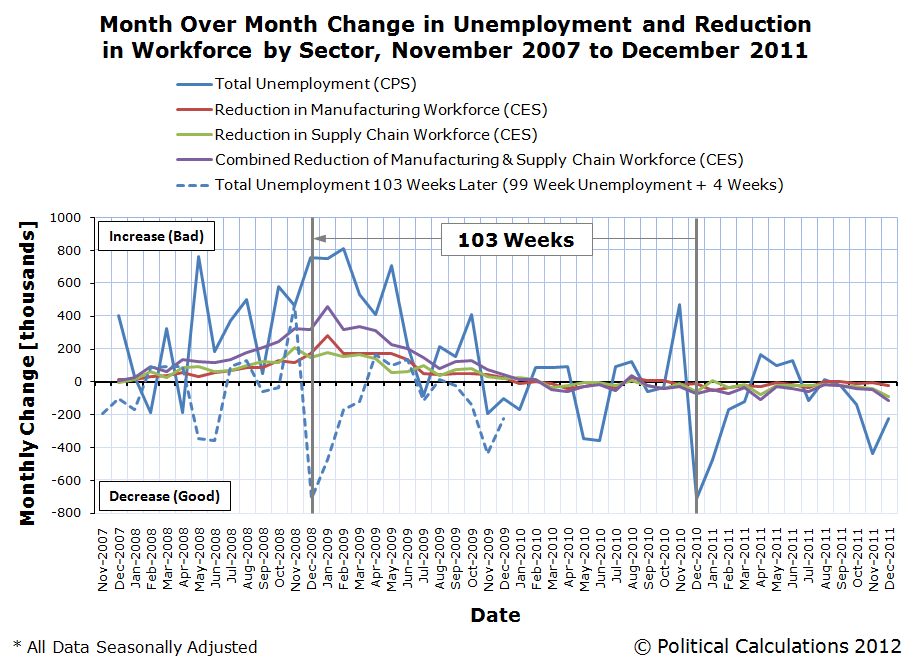 What we see is that the magnitude of a decline in unemployment some 103 weeks later is nearly equivalent to the increase in unemployment 103 weeks earlier. We also see that the corresponding peaks and troughs in the time-shifted data occur most often between in a range between 99 weeks and 108 weeks, which might be attributable to delays in individuals filing for jobless benefits after being laid off or in reporting the change in their job-seeking status.

This result suggests that instead of the employment situation in the United States having become brighter, the decline of the "official" unemployment rate really reflects the economic discouragement of those who lost their jobs during the recession, as they face diminished economic prospects.

And that would be the primary reason for the divergence between Nomura's inclusive unemployment estimate and the U.S.' official unemployment rate.