It's happened again! In a month that saw job gains for all other age groups, American teens saw their numbers in the U.S. workforce decline. Again. 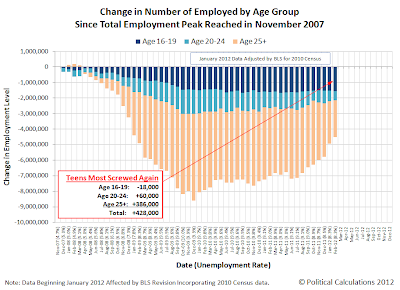 Compared to November 2007, when the level of total employment peaked in the U.S. ahead of the most recent recession, there are 1,556,000 fewer teens counted among the employed as of February 2012. For all practical purposes, there has been no meaningful in the job market for U.S. teens since that recession ended in June 2009.

Or perhaps more significantly, there has been no meaningful improvement in the employment situation for American teens since January 2010, some six months after the most recent increase in the U.S. federal minimum wage. (Six months is the typical period of time we've observed it takes employers to fully adjust to a change in the minimum wage.)

It's pretty interesting that this phenomenon keeps happening - especially now two months in a row with job reports that are being trumpeted as "good news".

It's not like President Obama doesn't know about the problem. Like his plans for economic stimulus or health care, he just doesn't care enough to follow through to make sure his plans help get Americans back to work.