We've been playing around with Google's Fusion Tables data visualization tools, which have been improved since our last experience in test driving them, and in doing so, we've created three interactive maps showing the price of gasoline around the United States.

First up, using GasBuddy's list of average gasoline prices by state, our map showing the average price a motorist can expect to pay for a gallon of gas as of 18 March 2012:

Next, here is our map showing the average combined federal, state and local excise taxes per gallon for each state in the U.S. as of 1 January 2012, as per the American Petroleum Institute:

Our final chart shows the actual average price of a gallon of gas per state, removing the increases in cost imposed by federal, state and local government taxes throughout the United States:

You might be pretty surprised to see that the price of a gallon of gasoline in Montana is the lowest in the United States, followed closely by Wyoming and Colorado, which is all the more remarkable because only Wyoming is ranked as an oil producing state. There is a big reason for this observed pattern, which we can illustrate using the following map of major crude oil pipelines in North America from 2001: 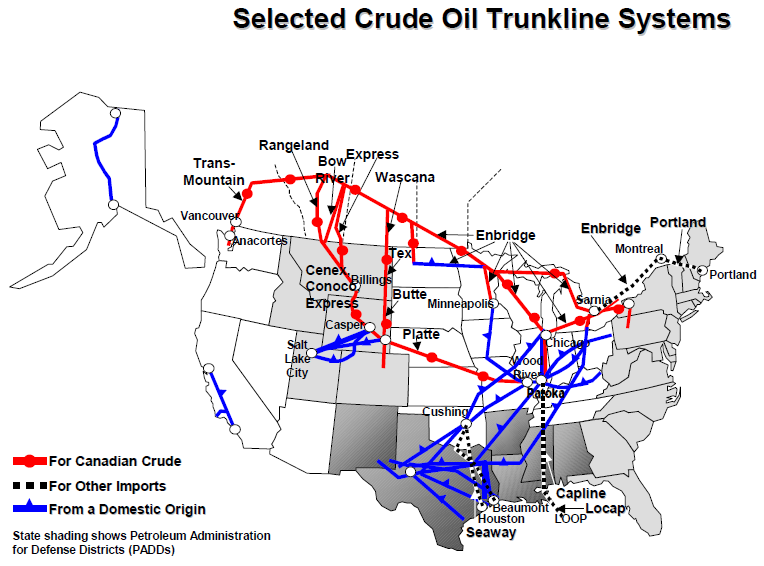 As we can see, Montana (along with Wyoming and Colorado) directly benefit from their direct connection to low-cost oil being produced in Canada that is fed through multiple pipelines into those states, where it is then refined into the gasoline and other products that consumers use.

So if you ever wonder what a President can do to lower the price of gas at the pump, especially one who believes that "we can't just drill our way to lower gas prices", just remind them that one thing they can do is to remove the barriers to building the pipeline infrastructure needed to inexpensively transport oil across the nation from where its cost is lowest to where it is highest. That would be, in fact, a constructive economic activity that would help secure the nation's ability to deal with the political instability that can affect world energy prices by their potential to disrupt energy supplies.

You know, the sort of things that a President ought to take seriously and work to achieve if they're serious about being President.

Even if the easiest path to achieving that national security goal mostly means moving themselves and the government's bureaucracy out of the way....