How much does quiet cost? Putting a price on a seemingly intangible thing can be quite a challenge, which is what made our latest project really irresistible! And quiet is something that is especially intangible, because if you think about it, quiet is defined as being the absence of noise. How can it be possible to measure something that literally isn't there?

But we figured out how to do it. And we did it by shopping for a dishwasher!

You see, dishwashers are inherently noisy devices. Most standard dishwashers make as much noise as might be found in a busy office or restaurant. That level of sound can make it tough to do things like carry a conversation or watch a television at a reasonable volume while a dishwasher is running in the next room.

Our following chart takes data compiled for the price and noise level generated for the 544 models of dishwashers for which we were able to obtain both bits of data: 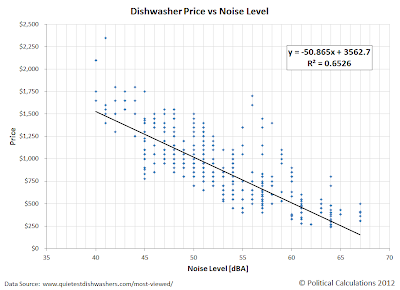 Running a simple linear regression with the data, we find that for every one decibel reduction in the noise produced by a dishwasher, people would appear to be willing to pay an additional $50.87.

Given the way people perceive noise, a dishwasher model that generates 10 decibels less noise than another unit would be half as loud. The average cost of the additional "quiet" that would be obtained for a model that is half as loud then would be $508.70!

And that is how to find the price of quiet!

On a final note, we should recognize that much of the variation in price for each decibel amount shown in the chart above really represents the differences in cost due to "other" features of the dishwashers, such as color or materials. By itself, the decibel level would seem to only "explain" 65% of the price of the 554 dishwasher models we've shown on the chart!