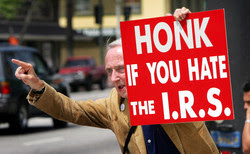 Now that you've gone through the ever-increasing hassle of filing your annual income taxes, especially if it took you until today to file your income taxes for 2011, perhaps you're now thinking to yourself "there's got to be a better way to do this!"

So why don't you invent one?

What if you were in charge of reforming the U.S. individual income tax? Would you consider ditching today's excessively complex tax code in favor of something much, much simpler? Something like a flat income tax, perhaps?

If so, you've come to the right place! Our featured tool for this post, which we originally introduced in September 2011, puts you in the driver's seat for determining how the nation's, and your own, fortunes would fare under such a system!

In the tool below, all you need to do is enter the percentage income tax rate that would apply to all Americans, from Warren Buffett on down to his pool of non-amused secretaries, along with the value of a single tax credit, which would be provided to each individual American, again regardless of who they are.

After that, if you want to see how your or your family's income taxes might change as a result of your dramatic proposal, enter your household's total money income (whether you earned a salary, wages, capital gains, and/or dividends) and the number of individuals who would be covered by it (sorry, pets and other livestock need not apply!)

We used our model of the 2010 aggregate distribution of household total money income for the U.S. in generating the "how would the federal government do with your flat tax?" portion of the tool, along with the U.S. GDP for 2010, and the IRS' count of the number of exemptions reported on tax forms for 2009 (the most recent year this data is available.)

In 2011, it took 72,536 pages to document the ins and outs of the U.S. tax code. We whipped our tool up yesterday afternoon. If you're into simple, this is about as simple as it gets.

Do you think anyone in Washington, D.C. wants that?