After stalling out in March 2012, the employment situation for April 2012 in the U.S. faded across the board. 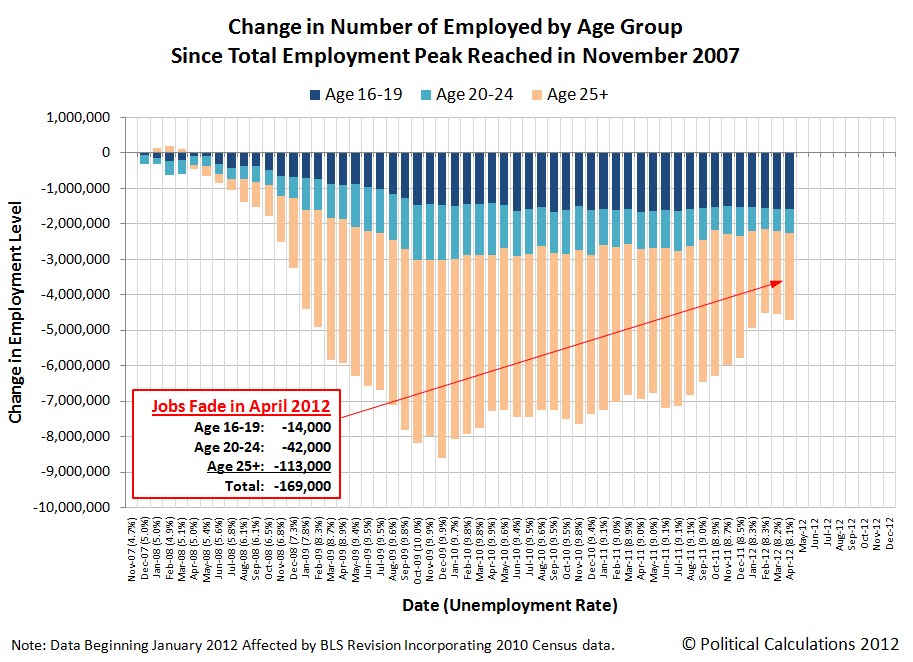 Compared to November 2007, when the total employment level in the United States peaked just before the peak in economic expansion marking the beginning of recession in the following month, there are 4,730,000 fewer individuals being counted with jobs as of April 2012. There were 141,865,000 people counted as being employed in April 2012.

Of the decline in jobs since November 2007, just over 1 out of 3 of the jobs that have disappeared from the U.S. economy in the time since may be accounted for by individuals between the ages of 16 and 19. Today, these individuals represent 3.0% of the entire U.S. workforce, down from a percentage share of 4.0% in November 2007.

Another 1 out of 7 of the decline in jobs since November 2007 may be accounted for by young adults (Age 20-24). These individuals represent 9.4% of the total U.S. workforce today, which is almost identical to their percentage share of 9.5% in November 2007.

The remainder of the decline in jobs since November 2007 is obviously accounted for by those Age 25 or older, who account for 51.8% of the decline in jobs. Unlike teens and young adults however, the percentage share of these adults in the U.S. civilian labor force has risen to represent 87.6% (just over 7 out of 8) of all working Americans), which is up from 86.5% in November 2007.

The April 2012 jobs report is consistent with what we would describe as a microrecession, which we first forecast for this quarter in June 2011.

By our definition, a microrecession is a period of relatively slow or negative economic growth for a nation that is either relatively minor (say of limited scope, affecting some but not all regions across a country) or is comparatively short in duration.

We continue to anticipate that the U.S. economy will not enter into a full blown recession in 2012, and will rebound in the third and fourth quarters of 2012. We do not anticipate at this time that this expected rebound will extend very far into 2013.