Political Calculations
Unexpectedly Intriguing!
May 21, 2012
A Short-Lived Order in the S&P 500

You can see that is the case in our highly refined chart below, which is based upon the daily values for both the value of the S&P 500 index and its trailing year dividends per share, rather than the average monthly values for both that we typically feature at Political Calculations. 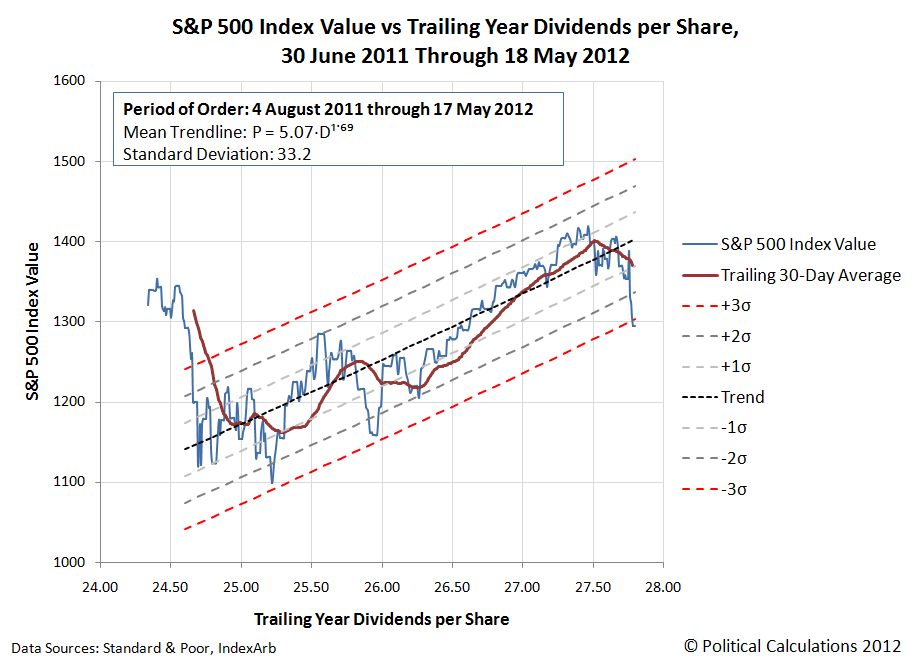 What we see is that the daily closing value of the index broke below its lower 3-Sigma "statistical equilibrium limit" curve that defines the bottom of the range where we could have reasonably expected stock prices to be found at least 99.7% of the time during this relative period of order in the stock market. The very low probability that we would see such an outcome if the statistical equilibrium defining the period of relative order was still in effect leads us to make the determination that the existing state of order in the market has broken down.

For us, "order" in the stock market can be said to exist whenever stock prices and their underlying dividends per share are closely coupled. When order exists in the stock market, the basic relationship between the two may be described in mathematical terms by a power law relationship, where the exponent is the ratio of the exponential growth rate of stock prices with respect to the exponential growth rate of dividends per share over time.

The basic variation of stock prices with respect to the mean trend curve defined by that power law relationship then may be reasonably described by a normal distribution, with the standard deviation in the data being measured by the difference between actual stock prices and the value of the mean trend curve for the corresponding level of dividends per share. Technically, this is the residual distribution of the data, which allows us to take the rising or falling value of stock prices and dividends per share into account, which would otherwise inflate the value of the standard deviation.

That works up until order breaks down in the stock market, as it did on 18 May 2012. In which case, we have invented entirely other methods for dealing with that situation, which is really simply when chaos is in the driver's seat for determining stock prices, which we can do pretty well in the relative absence of noise.

If only we hadn't chosen to stop making these kinds of forecasts public, rather than simply offering timely observations. Again, and again and again.

Maybe then, people like Cantor Fitzgerald's Peter Cecchini wouldn't be so surprised about what's changed since April....

But then, what we're doing just isn't possible, is it? Just ask the guys over at Seeking Alpha....