A lot has happened in that time. First, the change in the year-over-year growth rate of stock prices appears to have gone through a spike in August 2012. We say "appears" because this effect wasn't a the result of what we would describe as a "noise event", where investors react, or really overreact, to an event in the news by putting the market though a major swing in stock prices, kind of the way a dog on a leash might react to the sudden sight of a squirrel while being walked. 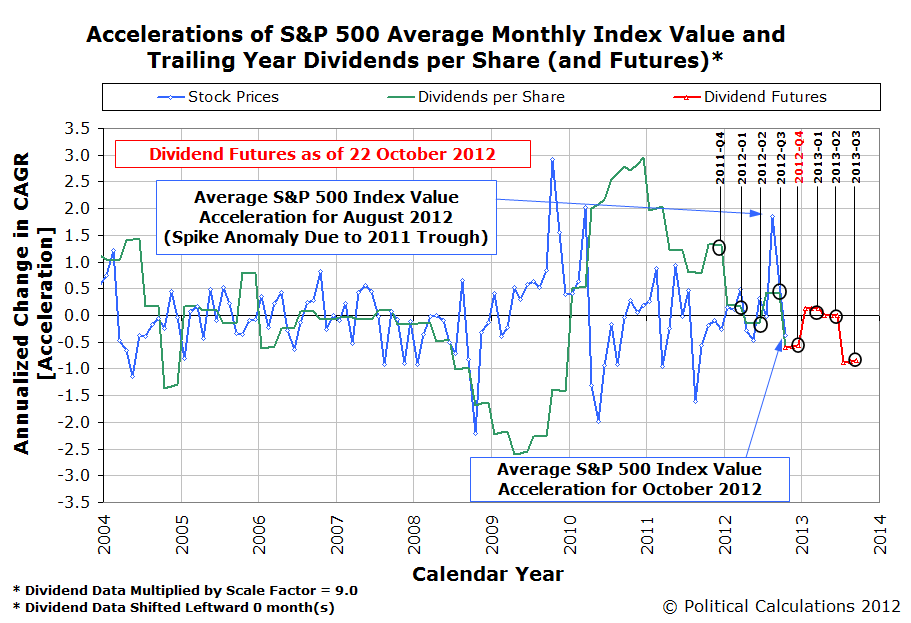 Instead, stock price volatility, as measured by the VIX, hit a low in August, and has been fairly steady at low levels for the last several months, as the S&P 500's stock prices rose from August to September, where they have been fairly steady since (or at least through the close of business on 22 October 2012).

The spike in our acceleration chart for August 2012 is really the result of how historical data can affect the results of the math behind how stock prices work. Here, our math measures the change in the rate of growth of average stock prices in reference to the year-over-year change in those prices. In going from July 2011 to August 2011, the S&P 500 dropped nearly 200 points to go below 1150, or roughly 15%, and stayed down at that level through September before beginning to rise in October 2011. 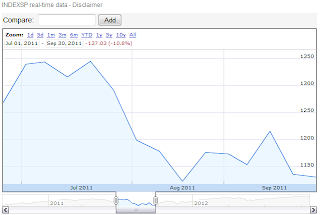 Flashing forward in time, since that low level for the S&P now forms the base of reference from which we measure stock prices, we see the result of that even from August and September 2011 as a spike in our chart, even though there has been no actual spike in stock prices during the last several months!

Since we use the information in this chart to project future stock prices (forecasts we stopped making publicly available after December 2011), you might think that dealing with this kind of data artifact would be a showstopper.

It's not really. All we need to do is to choose a different base reference point from which to measure the change in the growth rate of both stock prices and adjust the rest of the math accordingly. We found in playing with the data that all we have to do for the August 2012 spike is to reset the base reference month to be July 2011 - the spike disappears and we can anticipate what stock prices will be from what investors expect for future dividends!

It's not good news. It appears that investors have shifted their forward-looking focus to the current quarter in setting stock prices today, where they had previously been focused upon the first quarter of 2013. Since the expected change in the growth rate of dividends per share for this quarter is currently negative, the immediate effect of that change in investor focus is that the upward climb of stock prices of the past several months is now stalling out and beginning to reverse.

That's something that will continue until investors either collectively change their focus to another point in time in the future, or if should they remain focused on the current quarter, if the outlook for dividends in this quarter were to suddenly improve. If you're so inclined, you can use the dividend futures data presented in our accelerations chart above to make your own determinations for the future for the U.S. stock market. 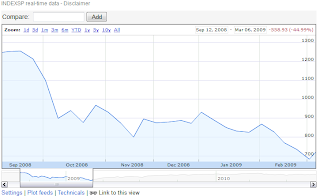 As a general rule of thumb, we'll close by observing that it's almost never a good thing when investors focus in on the very near term after having focused on a more distant point of time in the future. The last time we really saw that kind of near-sightedness was during late 2008 and early 2009 when the most-distressed companies in the stock market were acting to slash their dividends, prompting and preceding similar magnitude cuts in stock prices.

We're not saying that's definitively what is in store for the stock market today, but we are wary that part of the federal government's fiscal cliff set by current law to begin on 1 January 2013 is a dividend cliff for investors. We'll have more thoughts on that soon, here (the link will become active some time on 25 October 2012)!