We now have dividend futures data through the fourth quarter of 2013. Our chart below shows how the expected future for dividends looks: 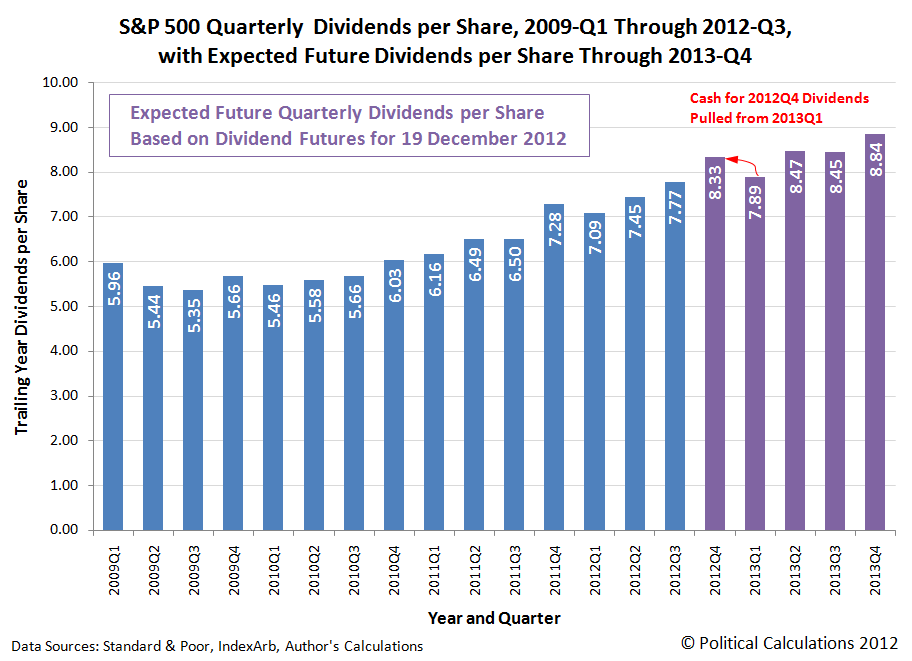 Given all the dividend-related activity following the 6 November 2012 election in the United States, where companies have acted to pull dividends from 2013 into 2012 instead to beat a now guaranteed dividend tax increase, we anticipate that there may be quite a bit of error in the actual dividends that will be paid in 2012-Q4 and for 2013-Q1. We believe the value that will actually be recorded for 2012-Q4 will be about $0.42 per share higher than what we've shown on the chart above based on how much money appears to have been transferred from 2013-Q1.

Looking at the history of the expected future for that quarter, 2013-Q1's expected cash dividend of $7.88 per share is down considerably from the high value of $8.30 per share that was expected to be paid in that quarter back on 17 October 2012. Almost all of the decline in the level of expected dividends for 2013-Q1 has taken place since 15 November 2012.

Looking forward now in time, the expected level of cash dividends for the S&P 500 looks as if the first three quarters for the U.S. economy in 2013 will be lackluster. The fourth quarter looks as if it will be better by comparison, but even here we've already seen some erosion in investor expectations for that future quarter.