Since 23 September 2012, the weekly data for seasonally-adjusted new jobless claims has been especially volatile.

The data reported last week, which applies for the week ending 12 January 2013, would appear to be more of the same. At least, that's what you might first think when you see where the data falls with respect to our statistical equilibrium chart of the trends in new jobless claims: 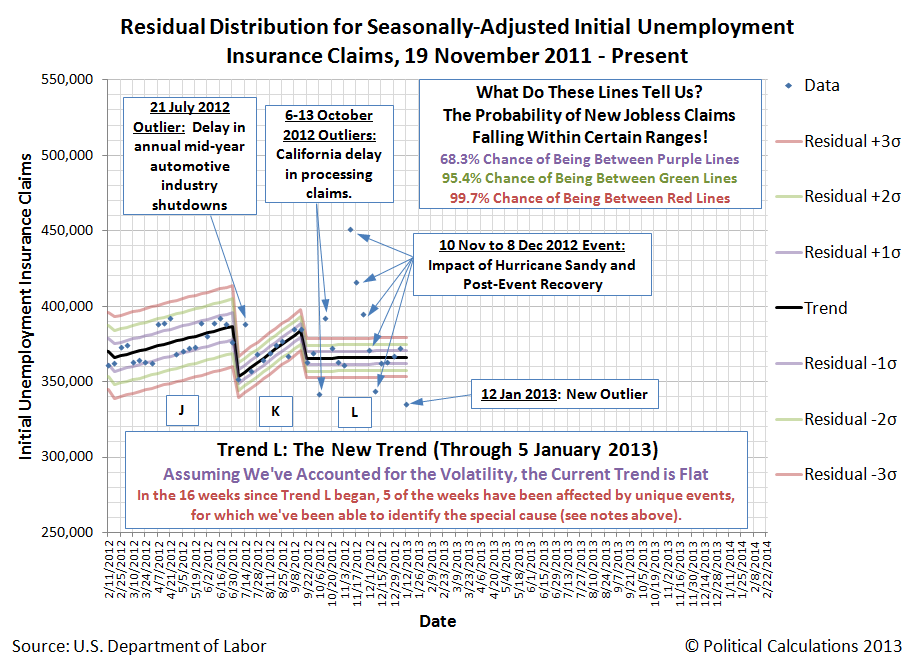 It looks just like an outlier, right? And truth be told, it definitely is. However, this outlier is not like the others, where we were able to easily identify the cause of the discrepancy with respect to the trend.

Instead, we think something positive might be at work. If it's what we think it is, the low number of initial unemployment insurance claim filings will be with us for another week, which we'll find out later this morning. The bad news is that it won't continue to be with us for much longer than that.

After having been elevated well above that level for the past two years, that threshold might very well mark the point where consumers believe gasoline prices are low, which in turn, might spark extra spending on their part thanks to the related boost in their discretionary income. That in turn would lead employers to retain higher levels of their employees, which would result in a lower level for new jobless claims!

This is very much the flip side to our hypothesis that there is a "high" level for gas prices in the U.S., which we've observed to kick in around a national average price at the pump of $3.50 per gallon. At this level, employers react to consumers having less of their income to spend on other things and the resulting loss to their business revenue by laying off larger numbers of their employees.

We've long noted that there is a 2 to 3 week lag between events like this occurring to when it shows up in the new jobless claims data. That's because most employers are "locked in" to their current payroll cycle - any employee retention decisions they make will take effect with their next payroll cycle. In the United States, with most employers issuing paychecks on an either weekly or biweekly basis, it then takes 2 to 3 weeks for the impact of any layoff decisions to fully show up in the data.

We say that this effect will be short lived, because the extra economic activity that might be associated with this positive factor will disappear after people begin receiving their 2013 paychecks, in which they will see a 2% reduction in their take-home thanks to the expiration of President Obama's Social Security payroll tax cut from 2011.

For a typical American household, that additional money now going to the U.S. government would be the rough equivalent of a sudden $1.40 per gallon increase in the price of motor gasoline in the United States.

The impact of that change will be progressively felt as employers change the amount of their tax withholding on behalf of the U.S. government in 2013. All paychecks should reflect the higher payroll tax by 15 February 2013 and most should see it for paychecks issued in mid-January.