Political Calculations
Unexpectedly Intriguing!
22 January 2013
How Long Do You Have Left to Live at Age 65?

We have a project we're working on behind the scenes here at Political Calculations, where we keep having to work backward in time to figure out when an average American man or woman who has reached Age 65 in a given year was born, and then forward in time to project the year to which they can reasonably expect to live if they have the same average remaining life expectancy of a man or woman who reached Age 65 in the year that they did!

So rather than keeping doing the math, we've constructed a couple of visual aids to make it quicker to get our answers. First, we've tapped the U.S. Centers for Disease Control's data for remaining life expectancy for people who reached Age 65 in each year from 1950 through 2009: 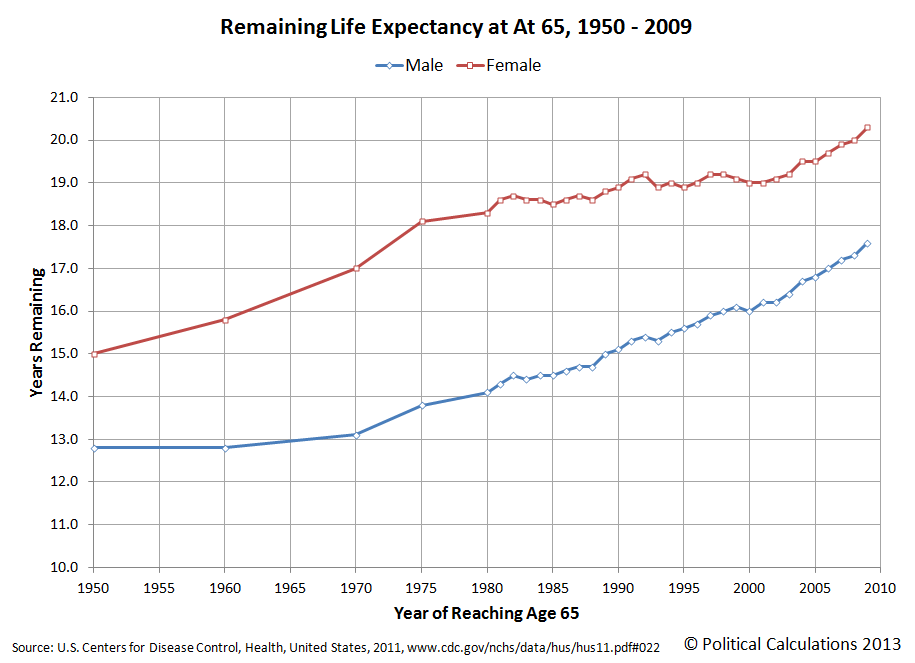 And then, using that data, for the birth years that correspond to the year in which the American men or women turned 65, we worked out the year to which these individuals can reasonably expect to live given the CDC's remaining life expectancy estimates, which we've presented in our second chart below.

Well, not so fast. Since that data, while useful for our purposes, would make for a pretty uninteresting chart to share with all of you, we've added some extra information to it. We've identified the range of birth years that would correspond to the legal minimum (17) and maximum (45) ages of enlistment for military service in World War 2, along with a special range that corresponds to those who would have been 26 years old during the war - the average age of U.S. servicemen in the Second World War. 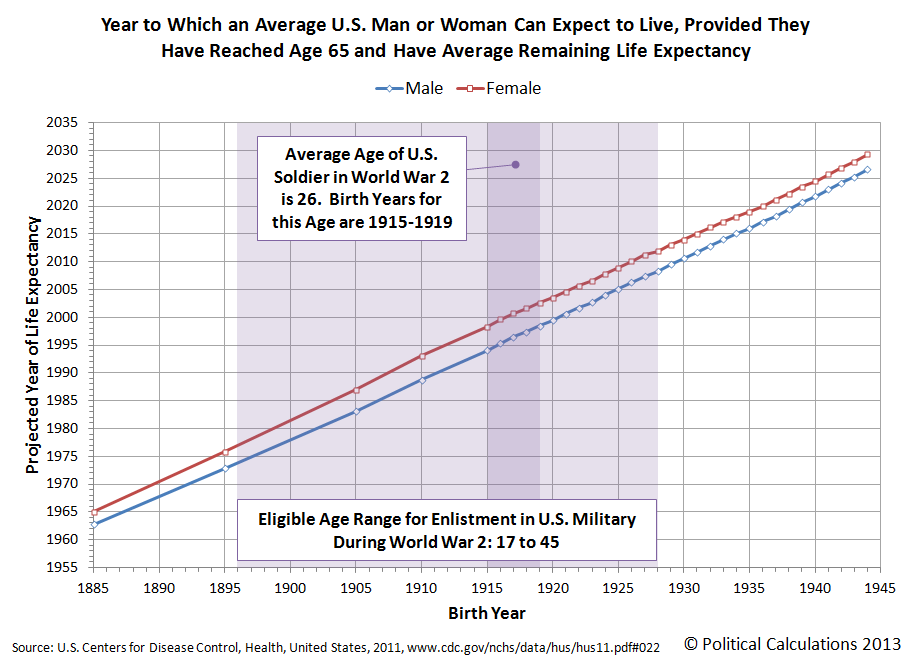 If you look closely, those aren't straight lines in the chart above - they actually curve upward ever so slightly!

The oldest living Congressional Medal of Honor winner from World War 2, Nicholas Oresko, just turned 96 years old on 18 January 2013, which puts his birth year of 1917 right in the middle of our highlighted "Age 26 during World War 2" range.

We note that the youngest legally-enlisted servicemen, those born in 1928 who would have been Age 17 in 1945, could reasonably have expected to live to 2008, given the average life expectancy for people born in that year who later turned Age 65 in 1993. By that standard, every veteran of WW2 alive today is someone who has lived longer than the average American born in the same year they were.

Here's hoping that all the remaining veterans of WWII continue to exceed the average American's lifespan expectations!