What effect might President Obama's 2013 State of the Union address proposal to increase the U.S. federal minimum wage from $7.25 per hour to $9.00 per hour have upon teens and young adults?

That question is especially relevant because teens and young adults between Age 15 and 24 represent approximately half of all minimum wage earners in the United States, not to mention making up a disproportionate share of individuals who earn wages just above that level.

Our first chart adds up all the income earned by individuals between the ages of 15 and 24 in the United States in both 1994 and 2011 [2], both in originally reported values and in terms of constant 2011 U.S. dollars: 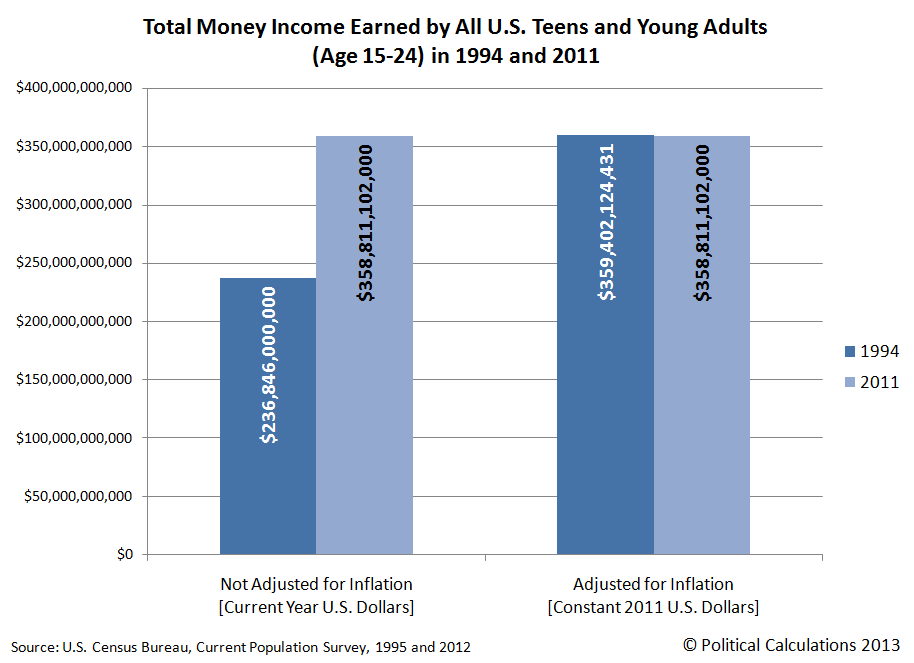 This result is pretty remarkable. In nominal terms, the aggregate income earned by all 15-24 year olds in 1994 adds up to more than $236.8 billion, while the aggregate income of those Age 15-24 in 2011 adds up to over $358.8 billion. But when we adjust for the effect of inflation, we see that the total amount of money paid out to 15-24 year olds in each year is almost identical!

In a sense, it is almost as if the employers of U.S. teens only have a fixed amount of revenue that they can use to pay them. 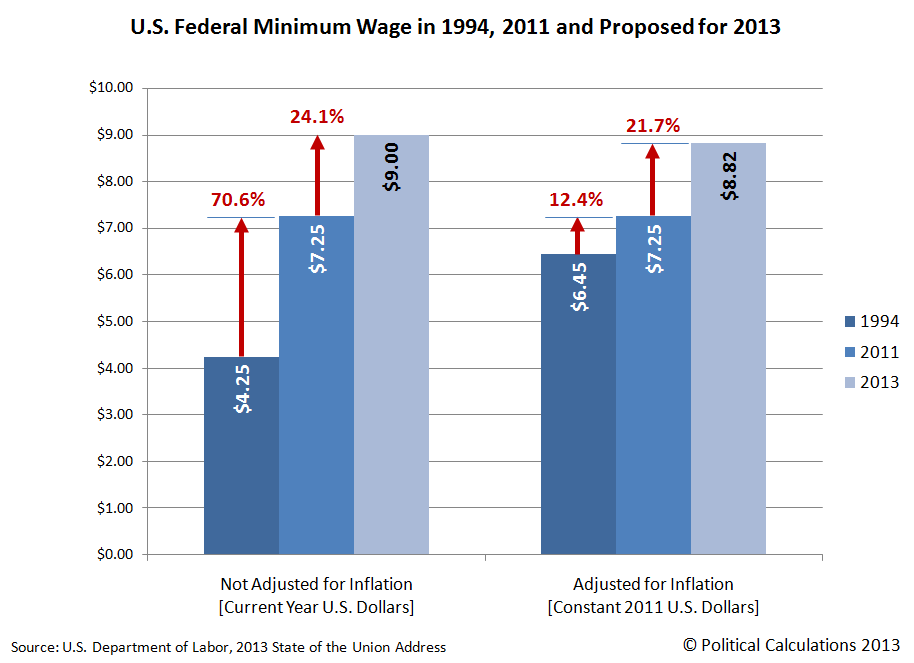 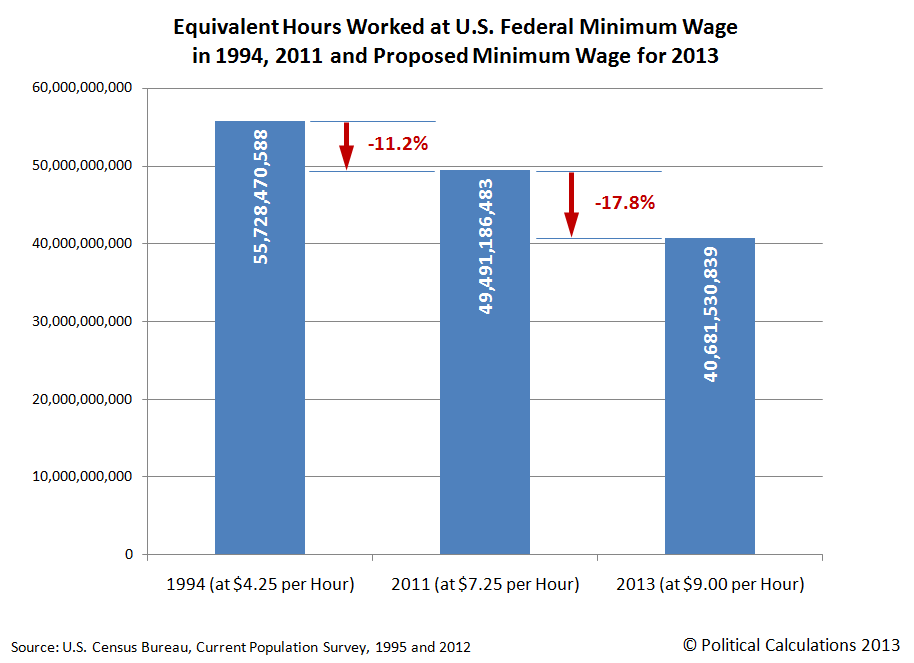 This is where that remarkable result we illustrated earlier comes into play. Because the employers of 15 to 24 year old Americans don't have any more money available in real terms to pay their workers than they did in 1994, an increase in the minimum wage forces a reduction in the number of hours in which those Age 15-24 can be employed below their 1994 level.

In the chart above, we see that the 12.4% real increase in the minimum wage from 1994 to 2011 results in an 11.2% reduction in the number of hours that U.S. employers had available for teens and young adults to work. If President Obama's 21.7% real increase in the minimum wage were to go into effect today, the fixed amount of money that the employers of teens and young adults have available would reduce the number of equivalent minimum wage hours by 17.8% below the 2011 figure.

We should also note that the number of hours shown for each year in our chart above would represent the hypothetical maximum number of hours that U.S. employers would have available for all teens and young adults to work. Teens and young adults who earn more than the minimum wage would reduce the amount of money and hours available for those who earn less than they do, forcing many out of the job market altogether. The more who make more than the minimum wage, the more who will be locked out from even being able to be employed.

So how did that 12.4% real increase in the federal minimum wage play out in real life for 15-24 year olds in the United States? Our final chart shows the changes in the number of teens and young adults both with and without income in 1994 and 2011: 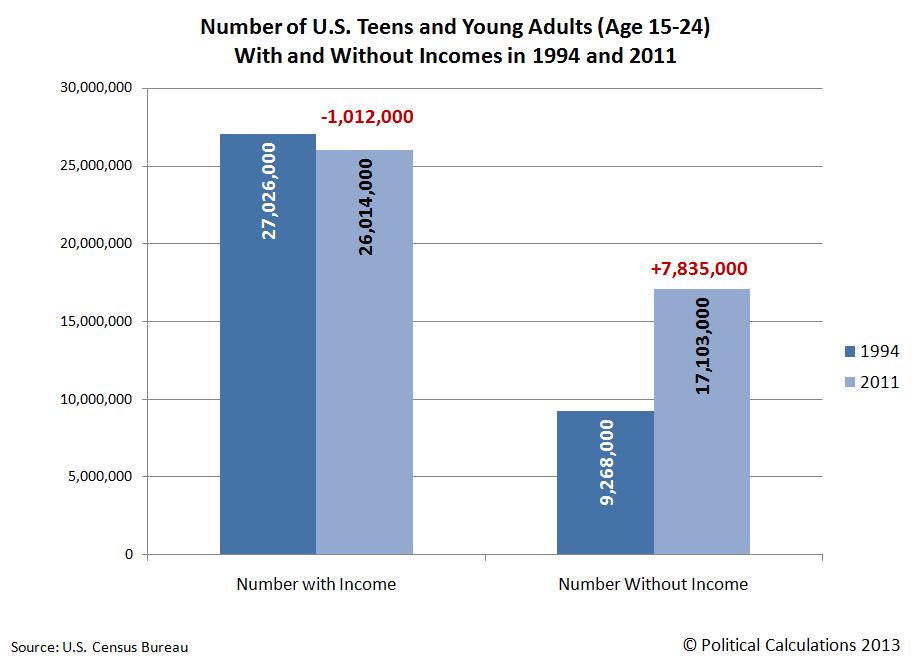 That 84.5% increase in the number of teens and young adults without any kind of measurable income in 2011 should not be surprising, given that over 89% of teens and young adults who do have incomes earned more than the federal minimum wage in this year - that high figure means that most of the impact will be felt by teens who are blocked by the minimum wage from entering the job market. In this case, that includes the entire increase in the teen population from 1994 to 2011. Remember our point about the "more who make more" than the minimum wage above!

In the absence of real economic growth boosting the revenues for the employers of teens and young adults, which would be what is needed to effectively counteract this effect, we can expect the same scenario to play out if President Obama's proposed minimum wage ever goes into effect.

In an upcoming post, we'll take on how much of a deadweight loss that would be imposed on the economy for just Age 15-24 year olds by implementing President Obama's poorly considered proposal. In the meantime, see the comments here for more insight on the outcomes that this proposal would really achieve.

[1] We selected 1995 because the U.S. Census Bureau only makes detailed income data for that year easily available in a digital-friendly format). We selected 2012 because it is the most recent year.

[2] The U.S. Census Bureau collects in March of each year, so its reported income figures really apply for the previous year, which is why we've indicated 1994 and 2011 in our charts.

[3] We've deliberately introduced a flaw in our analysis above (not the math, mind you!), so it conforms with how President Obama and many of his supporters see the world - we think that they should really have to explain why they are out to hurt teens and young adults so much if what they believe about income inequality is really true.