28 weeks ago, on 23 September 2012, a new trend in the seasonally-adjusted number of new jobless claims filed each week began. That trend has been characterized by extreme volatility, affected by such factors ranging from California's inability to process large numbers of claims in early October 2012, the impact of Hurricane Sandy from early November through early December 2012, a carry-over effect from December 2012's fiscal cliff event that ran from mid-January through mid-March 2013. And for 30 March 2013, perhaps a spike from the new seasonal adjustment factors that were just introduced in the last several weeks! 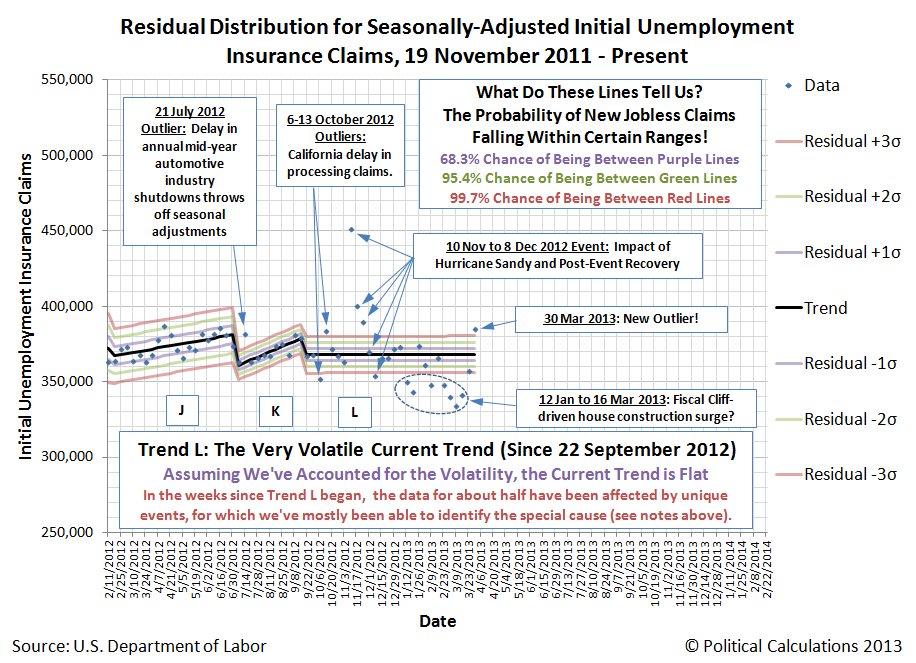 Let's get into the fiscal cliff carry-over effect, which we're considering as a hypothesis for what we observe in the data. Here, approximately 500 publicly-traded companies issued special or extra dividend payments to benefit their investors, who were seeking to avoid the risk of having dramatically higher taxes imposed upon them after the end of the year thanks to the "fiscal cliff" political impasse in Washington D.C., where the absence of a deal would hike the tax rate on dividends from 15% to as high as 43.4% with the looming expiration of the Bush-era 2003 tax cuts.

At the same time, many investors also sold off stocks at the end of the year to avoid a similar tax spike for capital gains, whose tax rate was set to rise from 15% to as high as 23.8%. Stock prices fell in response to this kind of selling in two phases. The first phase began following the re-election of Barack Obama as U.S. President on 6 November 2012, which continued through 15 November 2012. This phase was then interrupted by the actions of U.S. companies to issue extra or special dividend payments following the close of business that day, the reaction to which initiated a strong rally in stock prices as it created an incentive to hold stocks - at least through the time for when those dividend payments would be made before the end of the year. 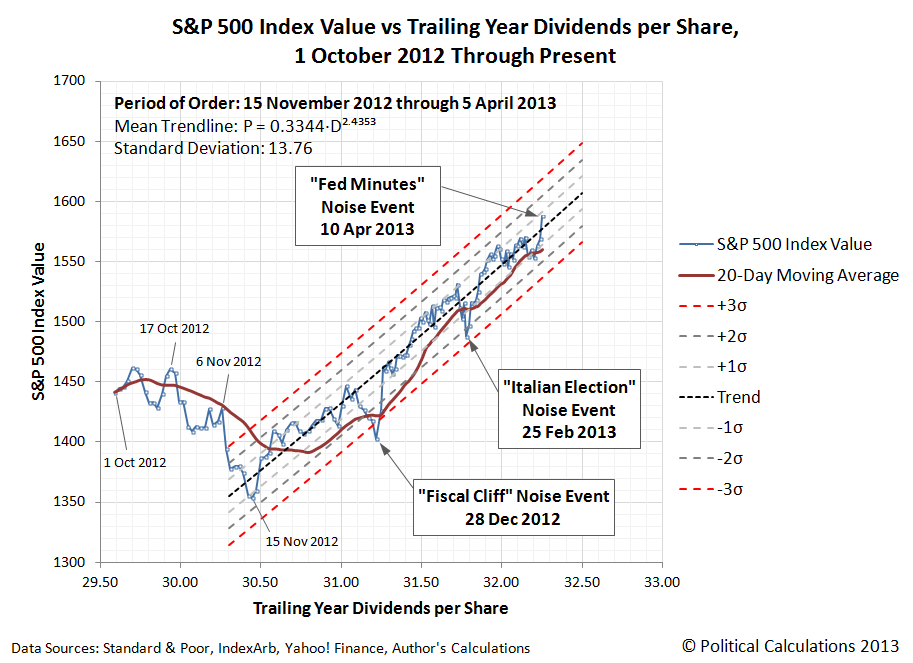 That rally then continued until the final days of December 2012, after investors had pocketed the extra dividend payments that had been issued and could begin the second phase of selling to avoid the higher capital gains tax rates that would take effect in the new year. Stock prices then fell dramatically again through Friday, 28 December 2012, which was effectively the last real trading day of the year given the timing of the weekend and the New Year's holiday in the following week.

All that money had to go somewhere. And if we can use history as a guide, a lot of it went into housing - much like how the first U.S. housing bubble was sparked by the exodus of money from the stock market that accompanied the deflation phase of the Dot Com Bubble.

Consequently, the new year began with a surge of permits to construct new privately-owned single-unit houses, which surprised many builders, who had been expecting business in that segment part of the market to slack off considerably after December. 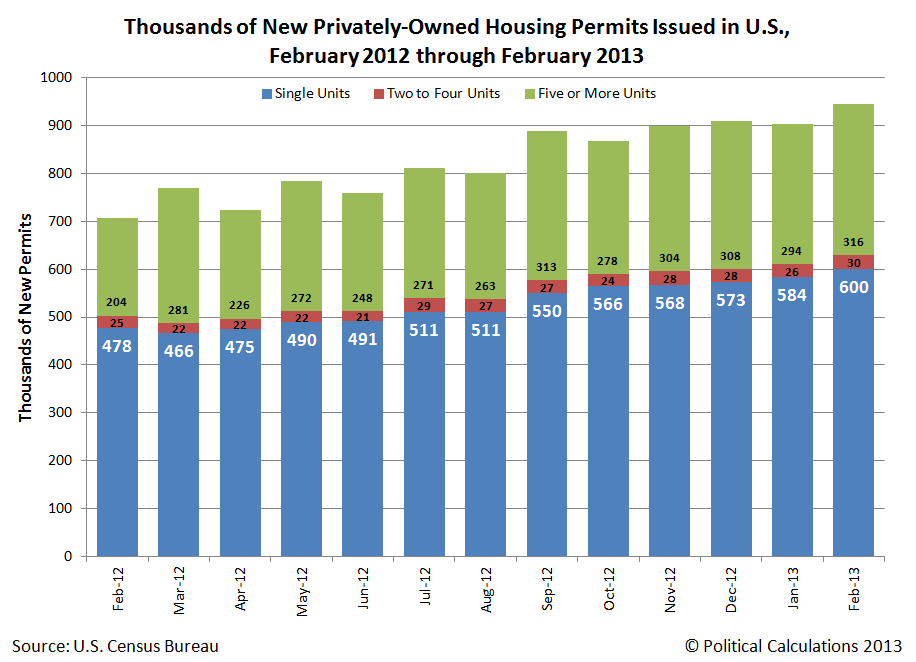 That unexpected increase in demand for new houses at the beginning of 2013 boosted construction employment, which has reflected in a reduced number of new claims for unemployment insurance being filed in the weeks from mid-January through mid-March, as there has been significantly fewer layoffs in the construction industry during this period.

It typically takes a U.S. builder some 3-4 months to build a new house. If this hypothesis holds, the decline in the number of new jobless claims filed in the period from mid-January through mid-March 2013 would coincide with the first phase of capital gains tax avoidance on the part of stock market investors following President Obama's re-election and the guarantee that higher tax rates would go into effect.

Also if our hypothesis holds, we can expect the U.S. housing market to be stronger than expected for several more months, especially for the kind of single-unit housing favored by recently dividend-and-capital-gains enriched stock market investors seeking second homes or investment properties in places known for their pleasant weather (especially in winter months) or recreational activities.

Kind of like all the places seeing the strongest growth in house prices at the moment.

Meanwhile, we suspect that the newest outlier for 30 March 2013 is primarily the result of the BLS' seasonal adjustment factors. Our final chart below compares the BLS' raw data with the seasonally-adjusted data for each weekly report going back to 6 January 2006: 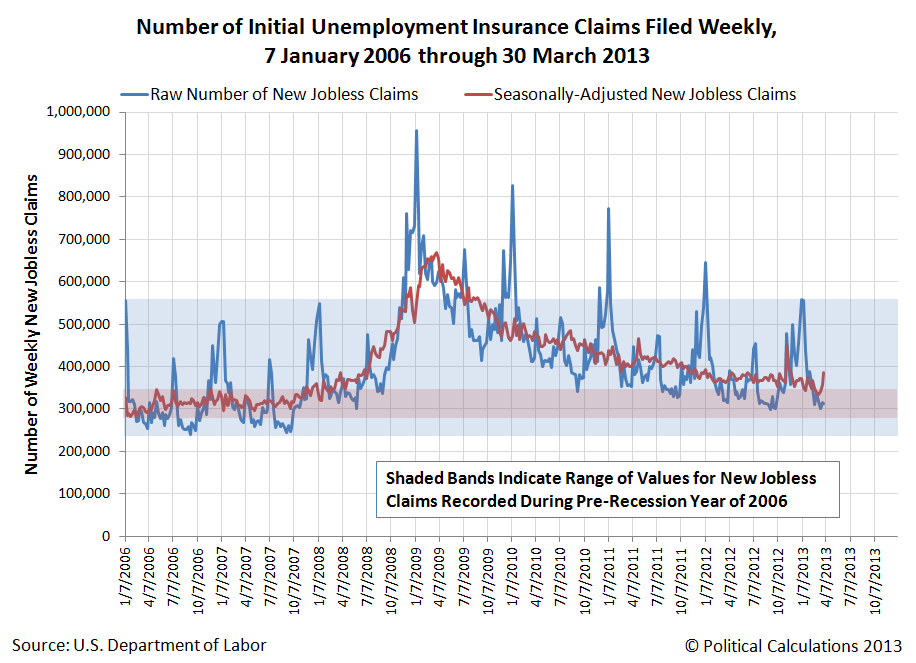 That most recent seasonally-adjusted value shows quite a lot of effect from such a small increase in the actual raw number of new jobless claims for the week ending 30 March 2013. The new numbers that will be coming out later this morning should be a lot closer in value to each other, and hopefully, will put all this volatility in the rear view mirror.