Political Calculations
Unexpectedly Intriguing!
02 April 2013
Zooming Out on the S&P 500

In playing our "what if" game with the S&P 500 last week, we announced that the chart we featured would be "the last updated version of this chart that we'll be featuring for some time".

But then, the S&P 500 set a new all-time high as measured by the value of the index' daily closing value, and what better way to mark the occasion than to feature a new version of that chart, which we will be featuring for some time!

Basically, we've retired the "zoomed-in" version of our chart tracking the change in the growth rates of trailing year dividends per share, which define the realistic future expectations for earnings, and the daily and 20-day moving average of S&P 500 stock prices and introduced the full "zoomed-out" version of the chart! Now, you can see everything that we currently see when we peer into our crystal ball! And, as an additional bonus, the expected future for the S&P 500's dividends per share in the first quarter of 2014 has stopped being an unknown wild card element and has crystallized into sharp relief. 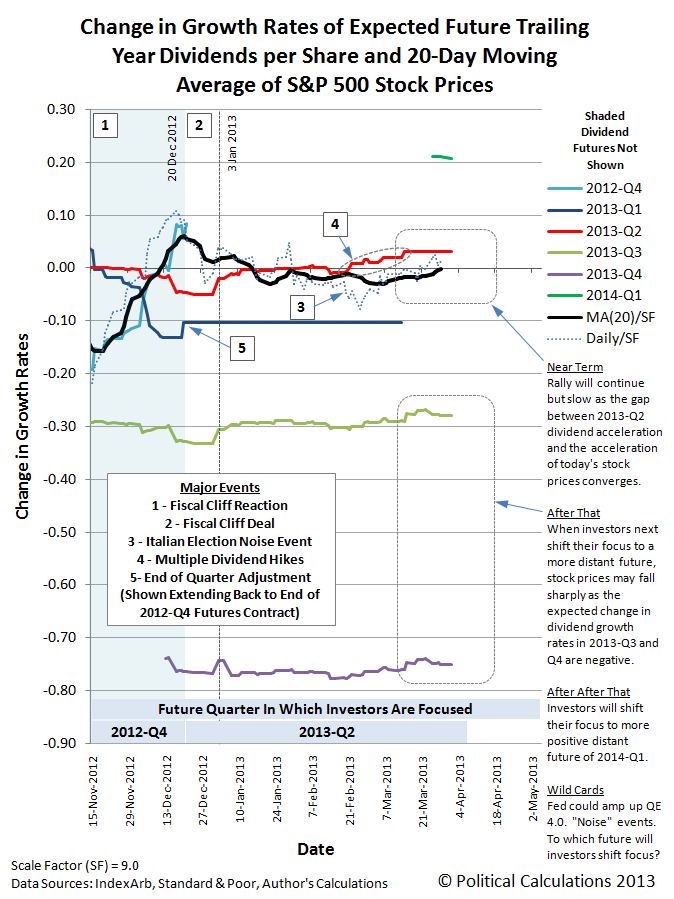 Here's how to read the chart. First, we see that investors are still focused on 2013-Q2 in setting the pace by which stock prices are changing, which we observe in the continuing convergence between both the daily and 20-day moving average of the S&P 500's index value with the expected change in the growth rate for the index' dividends per share for this current quarter.

Since these values are both still below the level set by 2013-Q2's dividends per share, we can expect stock prices to continue rising in the near term. However that rally will tend toward stalling out as the gap between stock prices and expected future dividends closes up, as it is increasingly unlikely that S&P 500 companies will announce additional dividend increases that might have a noticeable effect upon dividend futures or stock prices before that quarter ends in June 2013. 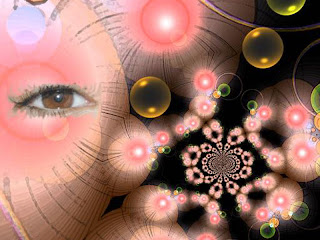 In the absence of significant noise events in the market, that convergence will continue until investors shift their focus in setting stock prices toward a more distant point of time in the future.

There are three alternate and parallel futures from which investors might choose. In two of those three possible futures, represented by the dividend futures for 2013-Q3 and 2013-Q4, stock prices can be expected to fall rather dramatically, with a more severe correction in stock prices occurring should investors become focused upon the fourth quarter of 2013.

Unfortunately, it is unlikely that investors will suddenly focus on 2014-Q1 without having first focused upon either 2013-Q3 or 2013-Q4. Our comments in our chart above indicate the basic sequence that we expect the market will follow.

As for when the shift in focus might occur, 21 June 2013 would mark the very latest that we would expect investors to be able to sustain their forward-looking focus on 2013-Q2 in setting stock prices, as this is the date the futures contract covering the S&P 500's dividends for 2013-Q2 will expire. The likelihood of a shift in the forward-looking focus of investors is presently increasing with each passing day, and it is extremely likely that the shift will occur in the weeks before 21 June 2013.

As always, the potential for noise events to significantly affect stock prices without warning remains a factor, and a noise event of moderate impact could well trigger the shift in focus in how investors fundamentally set stock prices.

The Federal Reserve's quantitative easing programs remain a wild card element. Here, should the Fed act to dramatically change their rate of acquisition of U.S. government and government supported enterprise-issued securities, we would expect stock prices to react, with stock prices moving in the direction of the change. At present, the Fed's current QE program is having little to no impact on stock prices.