Political Calculations
Unexpectedly Intriguing!
May 13, 2013
A Big Week for the S&P 500

Going into this week, we're not much closer to knowing for sure if the stock market's climb from its last notable trough on 18 April 2013 is the result of noise, a fundamental shift in investor focus, or the Fed's recent indication that it might really amp up its current quantitative easing program as we have previously speculated it might.

But regardless, even if stock prices stay flat, this will be a big week for the S&P 500, because this is the week that three of the largest companies that compose the market-cap weighted index will be determining who owns their stock for the purpose of paying out dividends for 2013-Q2! 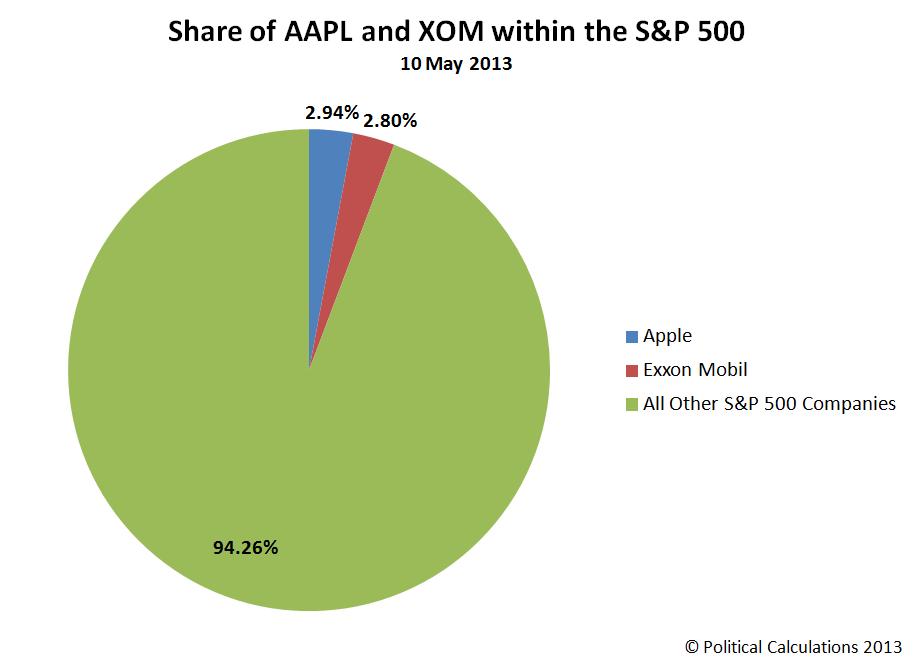 In fact, two of those three companies will be noting their shareholders of record today (Monday, 13 May 2013): Exxon Mobil (NYSE: XOM) and Apple (Nasdaq: AAPL). They just coincidentally happen to be the two biggest companies in the S&P 500, accounting for nearly 5.74% of the entire value of the index (at least, as of last Friday, 10 May 2013)!

The third S&P 500 heavy hitter who will be noting their shareholders of record on Friday this week is Chevron (NYSE: CVX), which is only the fifth largest component stock of the index, representing about 1.6% of the S&P 500's value.

Now, here's where things might get interesting this week. Focusing just on Apple and Exxon Mobil, who will be noting their shareholders of record today, if investors in these companies are primarily in the market to pocket dividend payments in this quarter, there's no incentive for them to continue holding these stocks in their portfolios after today. No matter what, as long as investors hold the stock they own in these companies through the end of the day, they will be paid the dividends they earned as stockholders of these companies in 2013-Q2, even if they turn around and sell their shares tomorrow or in future days.

Looking ahead to the near future, if they believe that share prices are likely to fall, then it actually makes sense for them to sell their shares after today. Doing so would then allow them to perhaps buy more shares back later when prices are lower, which would increase the yields they earn on their investments, or to perhaps do something different with their combined dividends and proceeds from selling their shares altogether.

But, if these investors believe that the stock prices for Apple and/or Exxon Mobil are likely to continue rising, then it's likely that they'll continue holding the shares they own and perhaps to add more shares to their portfolio now, while prices are lower than they expect they will be in the future, which will help contribute to rising stock prices in the near term.

Since Exxon Mobil and Apple together account for over 1/18th of the entire value of the S&P 500, we should be able to get a good idea of how investors believe the future will play out from observing how just these two stocks behave after today. That reaction, in turn, will help us determine if the run up in stock prices since 18 April 2012 is the result of investors shifting their focus to 2014-Q1 in setting stock prices or if it is just the result of a noise event, which tend to be pretty short-lived.

We'll close with our favorite chart, which shows that investors have spent much of the last week waffling in choosing the future they expect to play out, which kind of suggests that what we've seen recently for stock prices is likely the result of noise, but judge for yourself: 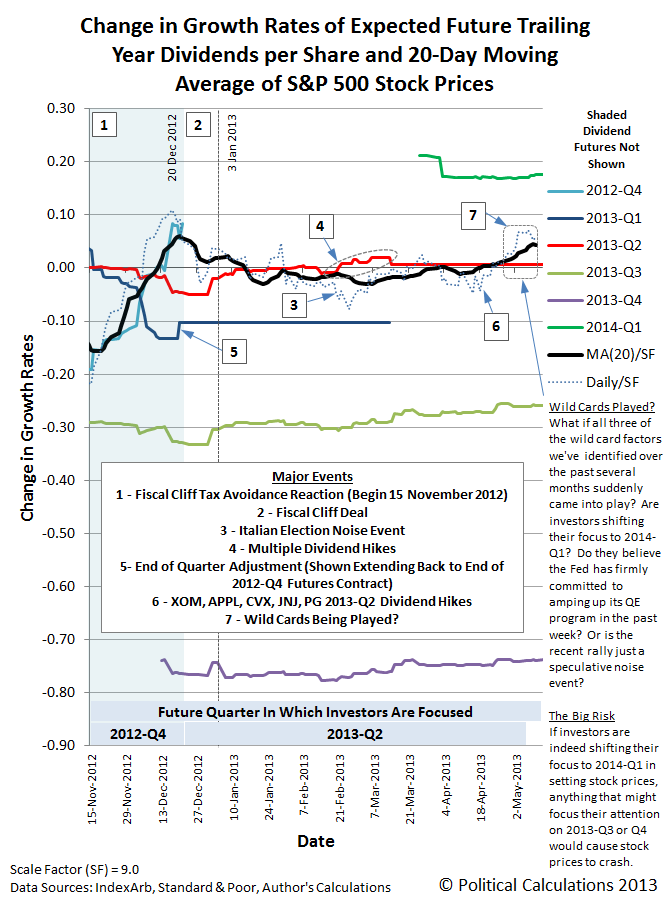 We'll be able to tell which future investors have finally selected as the acceleration of stock prices will converge with that distant future quarter's change in the growth rate of dividends expected for it. From 20 December 2012 until very recently, investors have been focused on the expectations for 2013-Q2 in setting stock prices, but we're running out of the available future left for investors to focus upon in that quarter....

Update 15 May 2013: Monday, 13 May 2013 actually marked the end of the period in which investors who owned stock in XOM or AAPL at the close of trading on 8 May 2013 would be included on the list of these stocks' shareholders of record. Investors wishing to collect dividends from these companies have been free to sell their shares since that time. Our thanks to the sharp-eyed reader who caught our error!

For our analysis however, the good news is that it didn't take long for the S&P 500 to prove it was going to have a big week!