What would the U.S. unemployment rate be today if teens were part of the economic recovery? 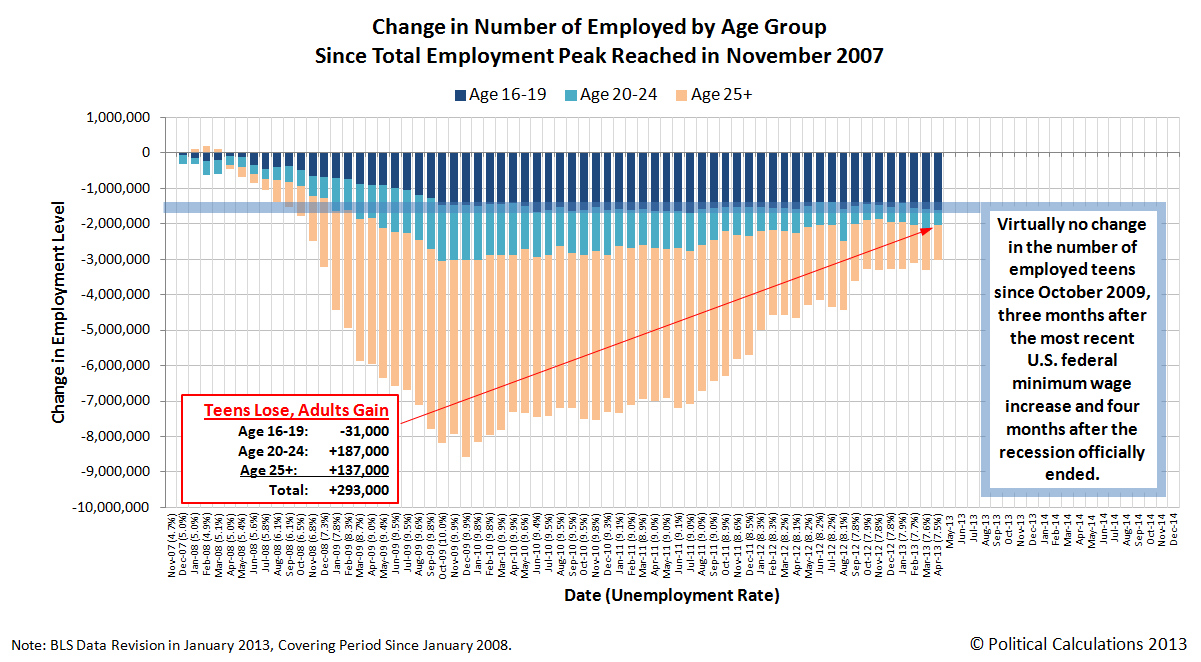 The following table compares the number of employed for each of these age groups at the peak unemployment rate for the recession in October 2009 and the April 2013:

As you can see in both the chart and the table, U.S. teens have not been included in the economic recovery. From the total employment peak in November 2007, nearly one and a half million jobs held by teens disappeared by the time the U.S. unemployment rate peaked at 10.0% in October 2009. That number of lost jobs for teens has increased to 1,607,000 in the three and half years since that low mark was reached, as teens have continued to lose jobs at an average annualized rate of -0.8%.

The reduction in the unemployment rate for teens however would certainly be much more pronounced. Assuming April 2013's estimate of the size of the teen labor force of 5,692,000, with a total of 4,855,665 working teens, the teen unemployment rate would now be 14.7% instead of the officially recorded unemployment rate of 24.1% for the month.

The sad part is that if President Obama had followed through on his promise to create 250,000 new jobs for teens in the summer of 2012, they would be over halfway there!

But as you can see in our chart above, the President's promised increase in the number of jobs for teens never arrived that summer, as the net number of teens employed from June through August 2012 declined by 68,000.

President Obama's supporters would likely counter that if not for the President's 2012 "Summer Jobs+" initiative, the number of employed teens would have instead decreased by 318,000 during those months. But then, we find it telling that President Obama has not announced any similar job creation program for U.S. teens in 2013 to build on that great success.