Since we last looked at the S&P 500's expected trailing twelve-month earnings per share some three months ago, the future for the S&P 500's forecast earnings has become considerably brighter going forward. Which is good, because it also suggests that the U.S. economy went through a recessionary period in the second half of 2012, from which investors are now expecting a recovery. 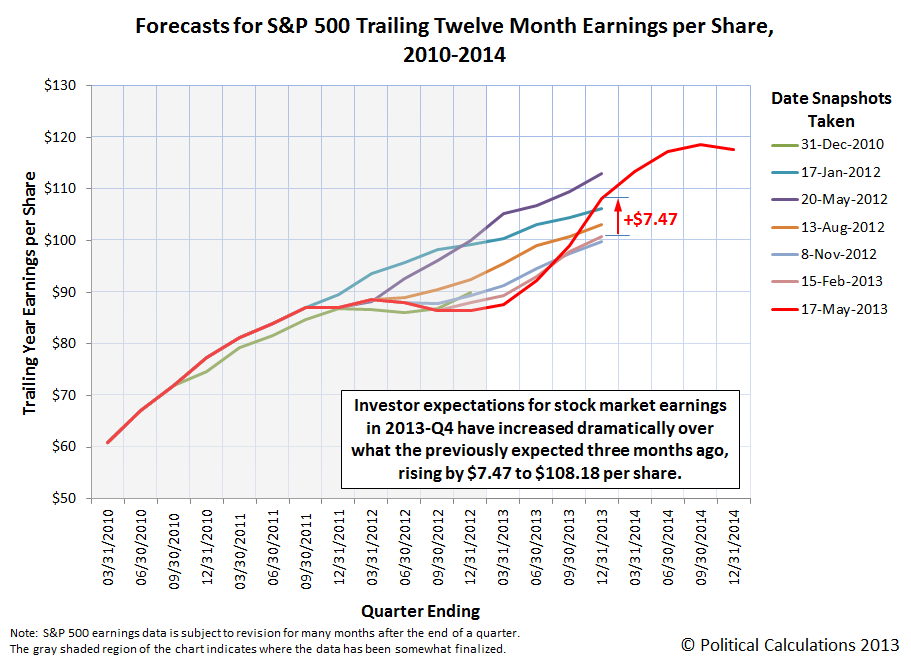 Here, for 2013-Q4, we see that investors have increased the level of earnings they expect to be reported for the S&P 500 in 2013 by $7.47 per share from our previous snapshot taken just over three months ago, with the new trailing twelve month figure now expected to be $108.18 per share.

This is close to the level that investors had first expected for 2013-Q4 back on 17 January 2012. But then, back in those heady days, they also expected that the earnings for the S&P 500 in 2012 would be $12.80 per share better than the $86.51 per share that they actually turned out to be. (Note: Standard and Poor may continue to revise its earnings estimate for 2012 for some time still as more refined information becomes available and as companies might restate their previously reported earnings.)

Looking at the full range of values that investors have forecast for the S&P 500's trailing year earnings for 2012, we see that they have ranged from a high of $100.07 per share, which was recorded back on 20 May 2012, to a low of $86.51 per share, as currently estimated. The low value of $86.51 per share also would appear to mark the bottom of an earnings recession for the index.

So why didn't stock prices crash at the same time? Well, as we keep pointing out, earnings don't drive stock prices. Dividends do. And although this confuses many of the more dim-witted commenters at Seeking Alpha, the changes that have taken place in dividends since mid-November 2012 are almost entirely responsible for the rally in stock prices since that time. Or at least up to nearly the end of April 2013, after which the story changes.

But we don't expect that certain people will appreciate that we've already told that story, and don't feel compelled to dumb it down for their benefit....