Yesterday, we found that the number of announced dividend cuts in the month of April 2013 was consistent with recessionary conditions being present in the U.S. economy.

Today, we're going to use international trade data to see if there's more to that story.

To do that, we'll be taking advantage of our observation that when a nation's economy is expanding, it will typically import an increasing level of goods from other nations, which we see in the form of a positive year-over-year growth rate for its imports. Conversely, if a nation's economy is contracting, we'll see it show up in the form of a negative growth rate for the goods it imports from beyond its borders. 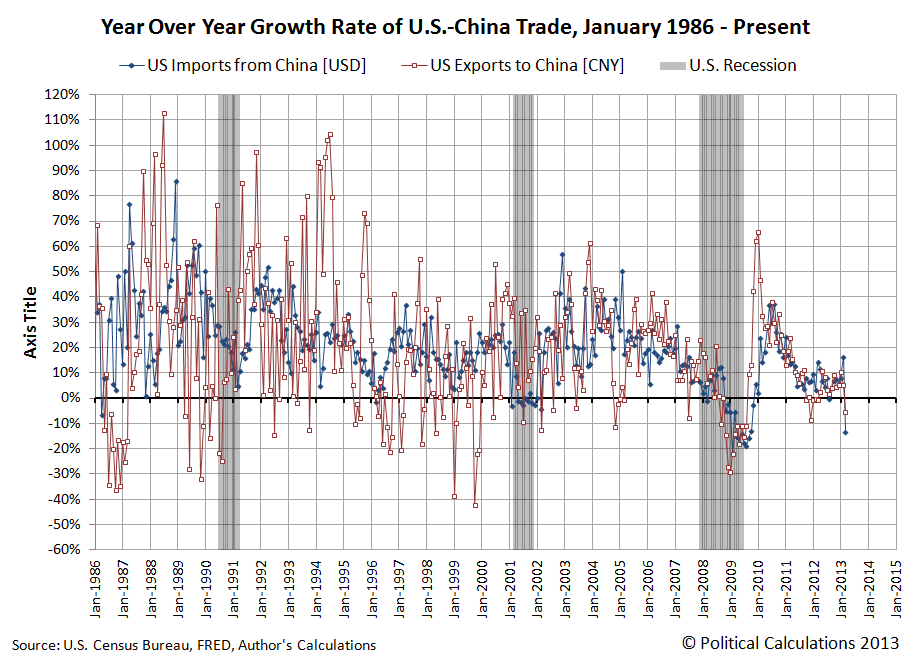 What we find right off the bat appears to be alarming, as the year-over-year growth rate of the trade between each nation appears to have plunged well into the negative territory that would indicate recessionary conditions are at work in each nation.

However, because we calculate year-over-year growth rates, we have to consider the possibility that there may have been an unusual spike in the volume of trade from a year ago, which might account for the unexpectedly negative result we observed in our first chart.

Our next chart looks at the value of goods imported by China from the U.S. (or exported from the U.S. to China, if you prefer) for each month from January 2012 through March 2013: What we find in this chart is that there was indeed an unusually large upward spike in the value of goods exported from the U.S. to China in March 2012, which accounts for the negative year-over-year growth rate result.

Digging into the Census Bureau's underlying trade records, we found that much of this spike might be accounted for by a sharp increase in the number of agricultural products the U.S. exported to China (primarily soybeans) and raw materials (such as metal ores) in that month, which has simply not been repeated in March 2013.

And looking at the recent trend in international trade data, we find that the overall value of U.S. exports to China is generally higher than the values recorded a year ago (with the exception of the unusual spike in March 2012), so it would appear that China's economy is actually comparatively healthy - the negative growth rate we observe is simply a data anomaly.

But then, we looked to see if a similar spike might explain the apparent crash in the value of goods that the U.S. imported from China. And we came up empty: 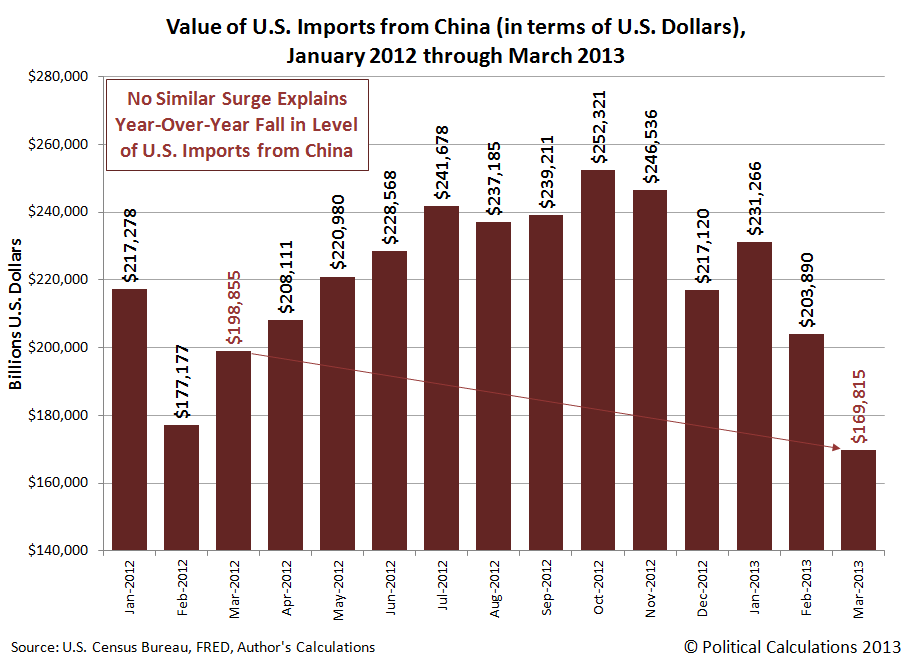 What this chart tells us is that the U.S. economy may have suddenly turned south in the month of March 2013, as the value of the goods it imported from China appears to have fallen rather dramatically, and taken in conjunction with the elevated number of U.S. companies declaring cuts in their dividends in April 2013, that suggests that there is indeed something contractionary going on in the U.S. economy.

Considering the likely "theory" that will be advanced in some quarters to explain the sudden drop-off in U.S. imports from China in March 2013, we expect that some might suggest that the recent federal government budget sequester might be behind the observed decline.

However, we find that the timing of the import crash doesn't work for that potential explanation. None of those government spending cuts took effect until nearly the very end of March, after most of the international trade recorded for the month had already occurred. And since the arrangements for things being shipped from overseas have to be made months in advance, that would be the second strike against this explanation.

And then, there's the little matter about which federal government spending is affected most by the budget sequester. With about 50% of the spending cuts affecting U.S. military programs, even if the timing did work out for the sequester to be a factor affecting international trade data, it just wouldn't make sense for so much defense spending (and really, government spending in general) to really be going to support the purchase of goods from China. That would be the third strike against such a theory having any real connection to what we actually observe in the data....

In reality, it's too early to tell if that means an economic contraction suddenly began to take root in the U.S. economy in March 2013. After all, how do we know that March 2013 didn't see an unusual negative spike in the value of goods being imported into the U.S. from China? We could be seeing the exact opposite of what happened with U.S. exports to China a year earlier!