We have two sources for dividend futures data. First, we regularly collect the distant futures data reported by IndexArb on its Dividend Analysis page, which reports the daily dividend futures data for the S&P 500, the Nasdaq 100 and also the Dow Jones Industrial Average. The image below represents a snapshot we took of the data back on 1 July 2013: 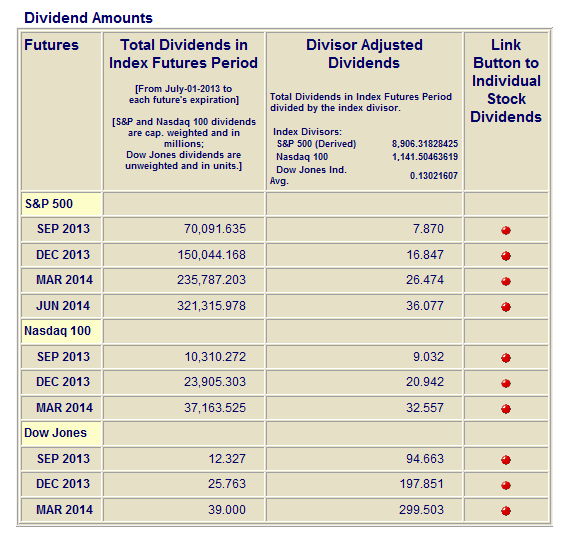 Originally developed to support trading based upon index arbitrage, which uses the data to help determine the "fair value" for stock index prices, what IndexArb is really reporting with these raw numbers is the amount of dividends per share expected to be paid out to shareholders for each index from the current day to the end of each of the indicated futures contracts, which expire on the third Friday of the month ending the indicated quarter.

So, if you want to find out what the quarterly dividend is for a given future quarter, you need to take the raw value provided in IndexArb's data and subtract the raw value for the quarter immediately preceding it.

Our second source of future dividends data for the S&P 500 is a bit easier to read to determine what level of dividends per share that investors expect to be paid in future quarters. That source is the Chicago Board of Exchange, which posts four separate dividend future options for the next four quarters, in which the price of each quarter's options is set to be 10 times the amount of dividends per share expected in the quarter. The table below provides links to the data for each of the CBOE's quarterly dividend futures contracts, along with the value we recorded back on 1 July 2013 for reference:

Although we presented the table in seeming chronological order, in reality, the earliest data belongs to the month ending the current quarter, which the other data following in order after that. For the data presented in the table above for 1 July 2013, the March and June contracts end in 2014, while the September and December contracts end in 2013.

Dividing the March contract data by that factor of 10, we see that this source expects that dividends in the first quarter of 2014 will be $9.167 per share. That's $0.46 per share less than what IndexArb's dividend futures expects, which in our experience, is really atypical, as they'll normally be within 5-20 cents of one another!

Why such a large difference between the two dividend futures for 2014-Q1? We suspect that the answer has a lot to do with how each of our sources determines their expected value of future dividends. IndexArb uses a "bottom-up" approach, where it takes the dividends that are expected to be paid by each company making up an index and then weights them accordingly per the companies' relative size within the index.

As part of that bottom-up build up, and in the absence of information indicating otherwise, IndexArb assumes that the actions of the past will be repeated in the future. For example, if a number of companies acted to boost their dividends by a particular amount in the first quarter of 2013, they assume they will boost their dividends by a similar amount in the first quarter of 2014.

By contrast, the CBOE's dividend values are determined through the trading of option contracts, with the price being set through more of a "top-down" process, where they start with the value expected for dividends in the future quarter, which is then adjusted through trading activity as new information about the future is absorbed. The value of the CBOE's dividend futures options is then particularly affected by news about the dividend plans of the most heavily-weighted components of the index, without necessarily considering all of the underlying changes occurring throughout the entire index that IndexArb captures.

In this case, it appears that the investors who have actively traded the CBOE's dividend futures contract for 2014-Q1 have made an assessment that the dividend hikes of the first quarter of 2014 are likely to be considerably less than the dividend hikes that were recorded for the first quarter of 2013. We believe that particular assessment was made on 13 May 2013, after it became clear that investors had shifted their forward-looking focus to the first quarter of 2014 in setting stock prices, which we observed in the form of a sudden downward shift from the CBOE's previously recorded value for this option on 10 May 2013. Only this particular future dividends contract changed its value this way at the time.

For our part, we're using a blend of the two sources in our ongoing market analysis, in which we're using the CBOE's futures data for 2014-Q1, but IndexArb's data otherwise. Here, we recognize a number of unique factors drove the dividend increases in the first and second quarters of 2013 related to the resolution of the so-called "fiscal cliff" tax crisis that will not be repeated in 2014, which we think the CBOE's data is capturing at present, but which we think that IndexArb's data is not as yet. 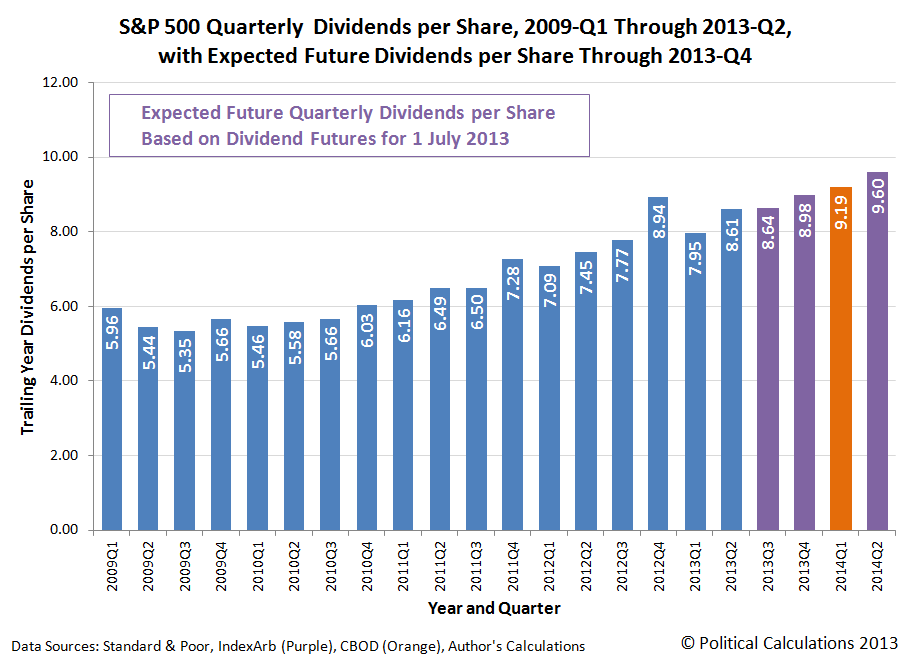 At some point in the future, we expect that the dividend futures represented by these two sources will converge toward each other as the quality of information regarding the future for dividends in that distant quarter improves.