Political Calculations
Unexpectedly Intriguing!
19 August 2013
How the Timing of the Tapering Is Driving Stock Prices

Why is the prospect of the Fed acting to taper off its purchases of securities in its current Quantitative Easing (QE) program appear to be driving stock prices lower?

Keep in mind that even though the Fed's QE efforts is clearly responsible for keeping the U.S. economy out of recession following the second quarter of 2012, the reason the Fed believes it can begin taking its foot off the QE gas is because the U.S. economy would appear to be beginning to recover from its microrecession.

And since the Fed's tapering policy is just maintaining the status quo for economic growth rates, stock prices should not be affected, because the portion of earnings that the businesses who make up the market could reasonably anticipate should likewise be unchanged in those conditions, simply because the rate of real economic growth is not expected to significantly change.

But that's not how prices really work. As we're about to show you, there hasn't really been any significant change in the future expectations for the sustainable portion of future earnings (aka "dividends"). And in fact, the only thing that has changed for investors is the point in the future to which serious and influential investors are focusing their attention in setting stock prices, which is being driven by the timing for when the Fed will begin tapering its QE programs.

They had been focused on 2014-Q1, which corresponds to a future in which the tapering of QE would not be expected to begin until 2014. New information of an improving situation for the U.S. economy combined with the comments of Fed officials is forcing them to shift their attention to an earlier point in time, 2013-Q3, since that coincides to the nearest future point of time in which Fed would announce that it is beginning the tapering of its QE program.

As it happens, those future quarters have different expectations for changes in the year-over-year growth rate of dividends that will be earned in them, which is what sets the fundamental pace of change in the growth rate of stock prices. And that difference in expectations at these discrete points of time in the future is what is driving stock prices today.

All these things we just described is visualized in our chart below. Mind the comments in the margin, because we believe can use what we know to measure the degree to which the forward-looking focus of investors is currently split in the stock market: 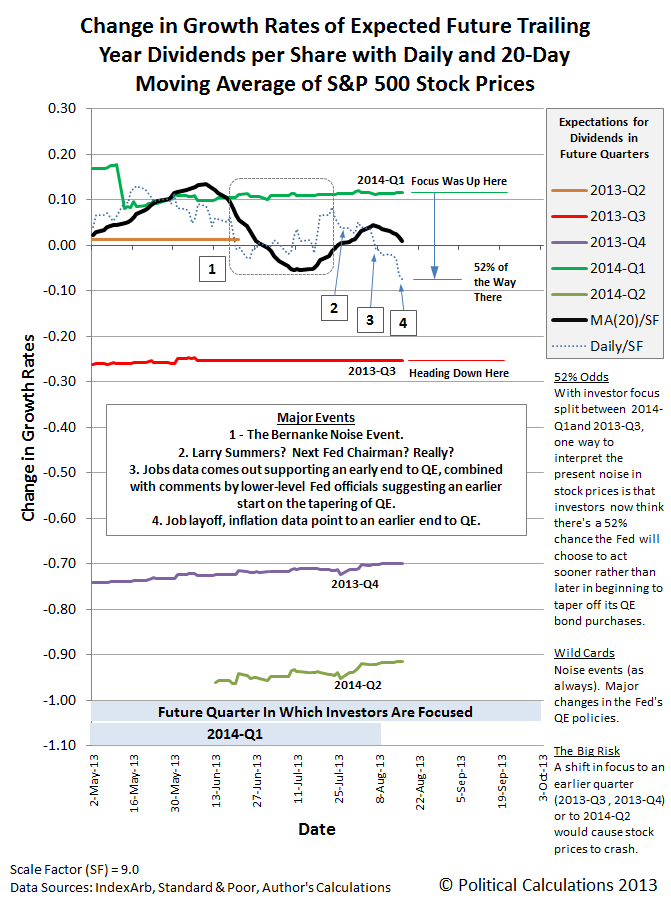 Notice in the chart above that the level for the acceleration of dividends for both 2013-Q3 and 2014-Q1 has been steady for weeks. That is the confirmation that what publicly-traded companies reasonably expect to earn in these quarters is unchanged.

Put another way, that's an indication that the market currently now placing a 52% probability that the tapering of QE will begin in 2013-Q3 rather than in 2014-Q4. If it helps put the recent decline in stock prices into proper perspective, what having investors 100% fully focused on 2013-Q3 would mean for stock prices is an S&P 500 potentially falling to around the 1500 level in September 2013.

Of course, the good news in that is that the much more positive alternative future for stock prices of 2014-Q1 would still be in the future. Investors would be able to re-shift their focus back to this point of time in the future, which would correspond to a major rally in stock prices.

If the Fed had instead indicated that the tapering of QE wouldn't begin until then, we could be enjoying that rally today. But apparently, the Fed's minions had other plans....

Unless it becomes relevant as events develop, this is probably the last time that we'll feature the following chain of analysis in considering the major market drivers this summer. We know we said that last week, but let us know when the links below stop being immediately relevant to the current situation in the market....