What a boring week!

The week ending on 23 August 2013 was a week in which the Fed's officials very clearly went out of their way to not make any noise as they jetted off to Jackson Hole, Wyoming for their annual retreat. And in the absence of other noise or significant changes in the fundamental outlook for the companies that make up most of the U.S. stock market, the market pretty much ended exactly at the same level it ended in the previous week.

Really! To illustrate the point, we added just two words to our notes on our chart from last week. Actually, just the same word twice "Still": 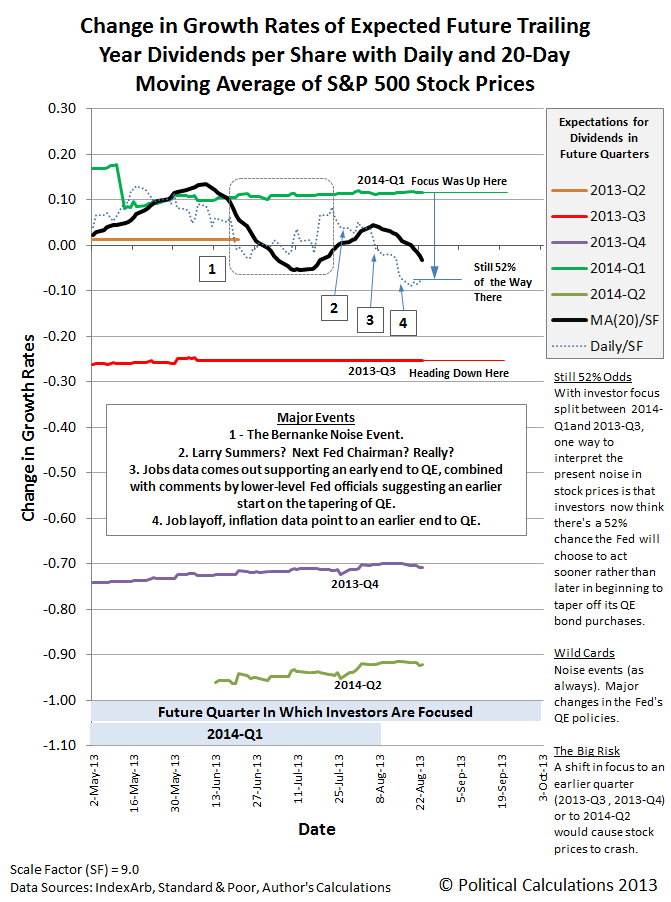 The biggest market-driving news of the week was the release of the notes from the Fed's 31 July 2013 meeting on Wednesday, 21 August 2013. And because they didn't provide any greater clarity for when the Fed might begin slowing the purchases of U.S. Treasuries and mortgage-backed securities that make up its current quantitative easing scheme, the change in the growth rate of stock prices remained stuck about halfway between the future associated with an earlier slowdown (2013-Q3) and the future associated with a later slowdown (2014-Q1).

It's almost as if the whole last week never happened!

There was one item in last week's news that we found noteworthy. It seems an economist from Princeton University has arrived at the same conclusion about the role of the Fed in creating the market turbulence we've seen this summer that we did just a day after the event in question, although it took them over two months to reach that same conclusion and communicate it to Fed officials.

JACKSON HOLE, Wyo.—The Federal Reserve believes that providing clear guidance about the likely future course of its policies make them more effective in boosting the economy, while helping to tamp down on market volatility and uncertainty.

That may not be so, said a paper presented here Saturday by Jean-Pierre Landau of Princeton University at the research conference hosted by the Federal Reserve Bank of Kansas City.

Over the last year, the Fed has been buying $85 billion a month of bonds in an effort to lower long-term interest rates, hoping that will spur growth and lower unemployment. Fed officials have been warning for months since May that they could start scaling back the program if the economy continues to improve as they expect.

The problem for the Fed is that as its policy makers have tried to prepare markets for this shift, they've generated considerable market volatility, in part driving up bond yields and boosting borrowing costs.

But the best part is when the Princeton economist discovers the role of what we've long described as "noise events" in affecting markets:

Mr. Landau lays a lot of the blame for the bond-market turbulence on the Fed itself. The paper notes that current Fed guidance on the policy outlook eliminates the cost of leverage, and creates "strong incentives" to increase and even overextend investment exposures.

In turn, "this makes financial intermediaries very sensitive to 'news,'" whatever that may be, he wrote. In this case, the catalyst for the market tumult is the Fed's statements about possibly scaling back the bond program this year. Once that view was conveyed to markets, it drove a big shift in market positions, to a degree that was very surprising to many observers.

But perhaps not so surprising if you know what expectations for things like stock prices are associated with different points of time in the future. And as we're emphasizing today, for the current "market tumult", it's really just a matter of determining how split investors are between the outlooks that apply for each of those alternative futures.

We'll see how long it takes Princeton's economics department to catch up to that realization. Our guess though is that Princeton's physics department may beat them to it, since this is, after all, the financial equivalent of the many-worlds variant of Schrödinger's Cat experiment....

We had looked forward to a boring summer. Instead, we've found ourselves providing the following observations and near real-time analysis of the economic story of the summer, to which the economics department at Princeton University would appear to only just be beginning to catch on....

The Kind of Analysis That We Invented